Despite Four-Year Hiatus GSP Could Beat Bisping At UFC 217

Posted on November 3, 2017 by admin in Uncategorized 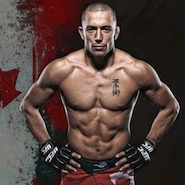 Georges St-Pierre is back, he returns to the octagon headlining UFC 217 at Madison Square Garden after being away from the sport for four years.

He faces England’s Michael Bisping for the middleweight title on a tremendous night for UFC with a stacked card of huge fights that will undoubtedly have the fans at the edge of their seats and is well worth the money.

GSP didn’t look especially good in his last fight and he’s moving up to the 180-pound weight class, which means he will be the much smaller man of the fight and has many fans wondering if he’s taking too big of a risk and if he can live up to the challenge after so much time of inactivity.

It will be interesting to see what form GSP shows on night fight. This fight will answer some key questions such as: has his fighting style evolved while he’s been away from the action? Has he incorporated a new set of skills that he’s keeping secret? And what will his strategy be to try and catch Bisping by surprise?

Although he probably won’t be the same fighter that UFC fans saw four years ago, he will probably dominate the grappling aspect of the fight and he probably will try to use it to defeat Bisping.

The Canadian must have seen something that he liked when he chose to fight Bisping because he had the freedom to choose any fighter that he wanted, and he decided to pick Bisping. Maybe he saw a weakness that he could exploit and he’s confident he can win. Keep in mind that Bisping has solid but not great wrestling skills.

The thing with Bisbing is that even though he may not be exceptionally crafted in any specific area, he is a well-rounded fighter that is aggressive and will keep going forward for the full extent of the fight. It’s true that he’s at times kind of a slow starter, but he will simply not quit and has become one of the hardest guys in the division to beat. He’s won five fights on a row since losing to Luke Rockhold on November of 2014.

The problem is Bisping’s last victory was against the 46-year-old Dan Henderson and he didn’t look exceptionally well in that fight it as he needed to go to the scorecards for that triumph by unanimous decision.

Because of that performance many fans and media members are confident that the 36-year-old St-Pierre can defeat Bisping. The Briton, however, is an experienced fighter with a lot of heart, which makes this combat harder to predict and bet on than it should be.