Posted on December 25, 2019 by Bobby Goodspeed in Sports News 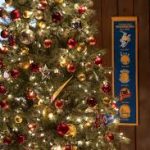 They call it ‘Christmasketball!’  OK, so the name doesn’t exactly roll off the tongue, however, Christmas Day has become one of the biggest, and most anticipated, days of NBA Basketball games all season long.  Even before the season got underway, sports writers were already talking about the Christmas lineup of games.

Back then the headliner was to be the Lakers vs. the Clippers in the ‘Battle of Los Angeles’ played at the Staples Center in downtown Los Angeles which is currently serving as home base to both NBA teams pending completion of the Clippers new facility in Inglewood.

And guess what, the Lakers and the Clippers have the best records in the NBA Western Division with the Lakers leading with a 24-6 record heading into the big Christmas day matchup.  The Clippers are at 22-10 with the Houston Rockets and the Denver Nuggets trying their best to crash the LA party.

Actually, the folks who set up these Christmas games showed considerable foresight in picking relevant teams for the most part with close point spreads. The exceptions being the Golden State Warriors, who faced the red  hot Houston Rockets as 11 point underdogs, and the New Orleans Pelicans, who took on the Denver Nuggets in the late game as 8.5 point underdogs.

In the early game kicking off the Christmas day NBA action, Shooting Guard Jalen Brown, wearing jersey #7 for the Boston Celtics, was the leading scorer with 30 points for the victorious Celtics when they took on the defending NBA Champion Toronto Raptors at home at the Scotiabank Arena in Toronto.

Brown hit the floor wearing neon shoes of two different colors. One was hot pink and the other electric yellow.  The Celtics were dressed in dark green uniforms and the Raptors were dressed in black.  The effect was like watching two little bright lights dancing around an otherwise darkened background. Distracting to say the least.  At least it was distracting to watch and they could become a distraction to other players as well.

Everyone connected with sports supports the ‘my cleats, my cause’ program, however perhaps it would be better if the players were required to wear shoes that are the same colors at least.

The Celtics never trailed the hometown Raptors and controlled the game all the way to a 118 to 102 final score. Kimba Walker scored 22 points for the Celtics backing up Jalen Brown and Fred VanVleet led all Raptors with 27 points in a losing effort.

But then the second game got underway in Philadelphia between the Bucks and the 76ers and the first thing noticed on the floor was that #21 for Philly, none other than Joel Embiid, had on one bright red shoe and one bright green shoe, here we go again. Let’s just hope that this does not become a new trend in the NBA.

Over in the NBA East, the Milwaukee Bucks lead all of basketball with 27 wins to only 4 losses.  The Bucks were up against the 22-10 Philadelphia 76ers on Christmas day. Even though the Bucks went into the contest as 3.5 point favorites, in the early going it was all Philadelphia, led by 6’10” point guard Ben Simmons. By the end of the first half of play, league leading Milwaukee trailed Philadelphia by 21 points, 69-48.

For once Las Vegas oddsmakers were fooled as the 76ers, who went into the contest as 3.5 underdogs, went on to lead the league leading Bucks by as many as 29 points and ended  up winning the game by a final score of 121-109.  Joel Embiid, in his dazzling shoes, led Philadelphia with 31 points and 11 rebounds.

Even without their two big stars, Stephen Curry and Klay Thompson, the Golden State Warriors came to the Chase Center ready to play basketball against the mighty Houston Rockets featuring the dynamic duo of Russell Westbrook and James Harden.  The Warriors were 11 point underdogs when the game began.  They ended up beating the Rockets by a final score of 116-104.  Merry Christmas Golden State!

Of course the big game took place in Los Angeles between two Los Angeles NBA teams.  Although the Lakers have the best record at 24-6, they have lost their last three games, albeit to good teams. They went down to the Indiana Pacers and the Milwaukee Bucks on the road then fell to the Denver Nuggets at home.

Questions about the health of both LeBron James and Anthony Davis prevailed before tipoff, but both superstars dressed out ready to play as 2.5 point favorites against their in house rivals, the LA Clippers.