Posted on July 27, 2019 by Bobby Goodspeed in Sports News 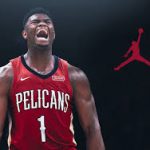 Back when Zion Williamson was simply a super star playing basketball for Duke University, he was proudly wearing the latest Nike basketball shoes that probably retailed at a premium price. Shortly after tip off, the premium shoe came apart, Zion went to the floor with a busted ankle and Nike stock dipped noticeably the next day. So much for Nike.

One of the huge perks that come with being drafted into the professional sports leagues in the top 10 of any major sport is the ‘shoe deal’ that they are offered to wear and display only the shoes and equipment of a certain supplier.  This is nothing new, we have seen it for years.

Tiger Woods is a good example.  His deal with Nike probably netted him somewhere near as much as he made on the golf course.  Not bad for just wearing nice clothes that were given to you in abundance anyway.

Young Zion Williamson may have outdone even Tiger with his shoe deal just signed with his boyhood hero Michael Jordan. As Zion was the number one overall pick in this year’s draft, he could have affiliated himself with any brand on the planet, but he went with Jordan on a five year deal that turned out to be the highest paying shoe deal in the history of the NBA.

Considering what we have already seen come down on some of these outrageous shoe deals, that’s really making a strong statement. Young Zion Williamson, before he ever makes his first basket for the New Orleans Pelicans, is pretty much set up financially for life, if he is careful with it.

The exact terms of this spectacular deal have not been announced at this writing but it is rumored that the total amount will exceed the seven year $87 million contact of LeBron James from Nike.

Even at that, it is well known that Williamson could have gotten even more money from other companies. Such is the compelling power of Michael Jordan who still radiates power and confidence every time we see him. Chris Paul and Russell Westbrook are already with the Jordan Brand.

Zion is still only 19 years and says he has dreamed about wearing the Jordan logo all his life. He told the press, “I feel incredibly blessed to be part of the Jordan Brand family. Since I was a kid, I dreamed of making it to the league and having the type of impact on the game Michael Jordan had and continues to have today.  He was one of those special athletes I looked up to, and I really can’t express how happy and excited I am for this journey”.

The great part about it is that the folks with the Jordan Brand are as ecstatic about the deal as Zion is.  In their view they just netted the biggest fish in the pond.  We can expect to see a good bit of Zion Williamson alongside Michael Jordan on Television and all over the Internet; and of course Sports Illustrated and such.

Congratulations to both Zion and the Jordan Brand on their historic deal.