Posted on September 7, 2018 by admin in Sports News 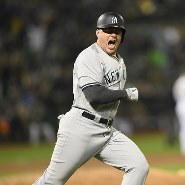 After a day off on the West Coast, the New York Yankees continue their road trip heading a little farther north to Seattle for a big three-game series against the wild card-contending Mariners.

Seattle, who is in the midst of a six-game homestand, won two of three at home against the Baltimore Orioles. Before that, they went 4-5 in a nine-game road trip that included a three-game series win against the division rival A’s.

After losing two of three against the Oakland Athletics, the Yankees need to find a way to win this series as the Mariners are just 5.5 games back from the Bronx Bombers in the wild card standings.

The Yankees are benefitting from the recent heroic exploits of first baseman Luke Voit. Since August 24 Voit has been doing his best Shane Spencer impression as the stout first baseman is hitting .356 with a team-leading seven home runs over that two-week span.

His homers have come at big moments too as five of the seven have either tied the game or given the Yankees the lead. Even more impressive is the fact that he’s hit the team’s last two go-ahead dingers in the seventh inning or later.

The Missouri State product has played a huge role lately hitting clutch bombs and helping stabilize a Yankees lineup that’s been badly hit by injuries in the second half of the season.

Throughout his career, Tanaka has loved playing in Seattle. In four starts at Safeco Field, the Japanese hurler is 3-0 with a 2.17 ERA, while holding opposing hitters to a .212 batting average.

Tanaka has a 1-3 record in his last five appearances but had a very solid outing in his last game against the Detroit Tigers at Yankee Stadium as he pitched seven innings and struck out six batters to earn the win.

Since joining the Yankees on August 1, Lynn has struck out 44 batters and walked just 10 in 35.1 innings of work, which represents the second most strikeouts on the team, just one behind ace Luis Severino.

Lynn, however, has been struggling recently as the 38-year-old has lost two of his last three games and given up 19 runs over the last 18.2 innings of work.