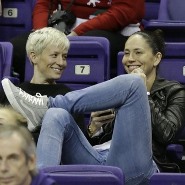 WNBA Legend Sue Bird publicly announced that she’s gay and that she is in a relationship with former U.S. soccer star player Megan Rapinoe, although she realized she was gay while at the University of Connecticut.

“I’m gay, Megan is my girlfriend … These are not secrets for people who know me,” Bird said in an interview with ESPNW’s Mechelle Voepel.

Bird, hardly the first WNBA player to come out as gay, said that she decided to go public now because it should happen when you feel good about it and now was the right time for her to make the announcement.

Bird, 36, was a two-time national champion at U-Conn. She was the No. 1 overall pick in the 2002 WNBA draft by the Seattle Storm, with whom she has spent her entire career

She’s one of the WNBA’s most famous players as she she’s a ten time the All-Star player and a four-time Olympic champion with the United States women’s basketball team.

Bird told espnW she is pleased that the WNBA has reached out to its LGBT fans over the recent years, but she said the league faces many other challenges such as racial and gender issues.