Home » Sports News » What Are The Odds That Farve & The Packers Will Make Peace?

What Are The Odds That Farve & The Packers Will Make Peace? 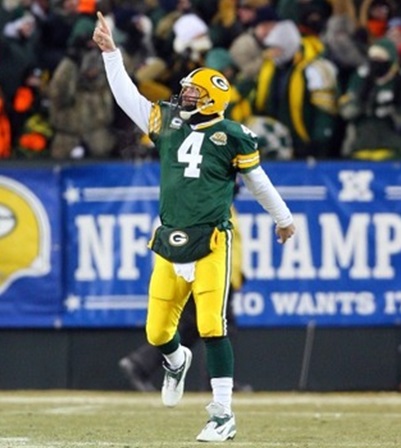 Who would have thought it? Practically nobody would have bet on it. But, against all odds, it looks like the Green Bay Packers are willing to let bygones be bygones and invite their prodigal son, Brett Farve, to come back into the fold to re-unite with the Packer organization.

Aaron Rogers made the first move back in February when he invited Farve to join him in presenting the Comeback Player of the Year Award at the NFL Honors Show. It was a touching moment… something to make everyone feel good about.

After all, Farve played his heart out for the Packers for 16 years. No player of his time ever gave more of himself to the game of football than Brett Farve.  He was a local hero up there in “CheeseHead” country and every school kid new his name.  Many got to meet him personally… and don’t forget, Farve led the Packers to a Super Bowl victory in 1997… the fans aren’t likely to forget that one.

Green Bay president and CEO Mark Murphy recently said at a team event, “We’re hopeful to have Brett back in the fold and get him back involved in the organization soon.”  Of course, that was the same Mark Murphy that traded Farve to the New York Jets back in 2008.

But time heals all and now the two are getting together in what must be seen as a win-win situation for all.  Aaron Rogers said, “He’s going to obviously be in the Packers Hall of Fame.  He’ll get his number retired, and he’ll be in the Pro Football Hall of Fame in the next few years.  It’s important, I think, to make sure that he’s recognized for all the accomplishments that he’s achieved in our organization especially.”

“He’s still very dear to many of our fans for the things that he’s done for the Packers on the field.  You can never take that away.”