Verlander Looks To Keep Yankees from Advancing to World Series 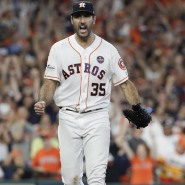 The New York Yankees will try to beat the Houston Astros for the fourth time in six games to secure their place in the 2017 World Series tonight at Minute Maid Park.

If they win tonight the Yankees will face the Los Angeles Dodgers in this year’s World Series starting Monday in California. If they lose they would have to place yet another elimination game.

Although this postseason the Yankees are 4-0 in must-win games and the prospect of facing a game seven probably does not rattle them, they’d rather win tonight and enjoy more time to prepare for the Dodgers.

The Bronx Bombers have not played in a World Series since 2009 when they won the title against the Philadelphia Phillies title.

Joe Girardi will send Dominican pitcher Luis Severino to the mound, who after a disastrous start in the Wild Card game against the Minnesota Twins has had two quality starts.

Houston won the first two games of the ALCS by an identical 2-1 score led by aces Dallas Keuchel, who lost game 5, and Verlander.

Verlander, 3-0 in the postseason, pitched all nine innings in game 2 when the Yankees also used Severino but lasted only five innings.

Houston has only reached World Series in 2005 when they were swept by the Chicago White Sox. If they win the next two games to reach the Fall Classic they would become the first team to defeat both the Yankees and Red Sox in the same postseason.

That looks quite improbable right now, not only because they trail 3-2, but because the Yankees offense, mainly Aaron Judge, Gary Sanchez and Didi Gregorius, has caught fire after struggling early in the playoffs.

The Yankees have an exceptional bullpen led by Chad Green, David Robertson, Tommy Kahnle and Cuban closer Aroldis Chapman, who has three saves in this postseason.

In addition to that, the Astros offensive leaders have gone cold. Jose Altuve, Carlos Correa, Yulieski Gurriel and Josh Reddick had a batting average of less than .100 at Yankee Stadium as they managed just four hits and three RBIs in 43 at-bats.

Yesterday the Los Angeles Dodgers beat the Chicago Cubs 11-1 in game 5 of the NLCS to advance to their first World Series since 1988.