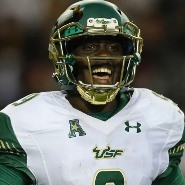 In the last two meetings, each team won once. In 2015 the Bulls won at home against the 22nd ranked Owls 44-23 led by Marlon Mack’s 230 rushing yards and three touchdowns; while in 2016 Temple defeated the visiting Bulls 46-30 were led by 210 yards and two TDs from Ryquell Armstead at Lincoln Financial Field.

USF has won eight straight and enters this one undefeated in head coach Charlie Strong’s first three games with the team, which includes a dominant 47-23 victory at home over the University of Illinois last week, with 680 yards of total offense.

In week 1 the Bulls defeated San Jose State 42-22 at CEFCU Stadium led by 212 passing yards and two touchdowns from quarterback Quinton Flowers, while in week 2 they beat Stony Brook 31-17 at home.

Three Bulls, led by quarterback Quinton Flowers, have already exceeded 200 yards rushing this season, while Flowers has also thrown for eight touchdowns. At running back, Darius Tice has 256 yards and D’Ernest Johnson has 215.

Temple is coming off back-to-back wins for head coach Geoff Collins as quarterback Logan Marchi has passed for five touchdowns and has yet to throw an interception this season. He will put that mark on the line against a USF defense that already has eight picks.

The Owls will try to bottle up Flowers using a stinging defense that already registers 14 sacks and forced six fumbles.

The Bulls had to postpone their September 9 game at Connecticut due to Hurricane Irma two weeks ago.