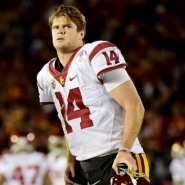 The college football weekend kicks off on Friday night at the Palouse as the undefeated USC Trojans (4-0) visit the also undefeated Washington State Cougars (4-0).

The No. 5 Trojans have won five straight at Washington State, so you can expect an amazing atmosphere as these two ranked teams square off.

The game features two of the nation’s top quarterbacks in two totally different systems playing for two undefeated teams that have a lot at stake so expect a lot of fireworks in this one on Friday night.

For the No. 16 Cougars’ Luke Falk is the most accurate passer in the PAC 12 Conference and when he’s at his best he’s so methodic and efficient to a point where looking at him becomes boring. He takes what the defenses give him, finds a weakness in their formations and ends the drives in touchdowns. As a result, Washington State has the second most passing touchdowns in the NCAA (14).

He needs to continue to do just that as he faces a Trojan defense that ranks third in the nation in turnovers forced and has produced 10 takeaways in the past two games.

Trojan Cornerbacks Jack Jones, the PAC 12 defensive player of the week, and Iman Marshall will have their hands full trying to stop Washington State’s wide receivers.

The Trojans have high expectations from their quarterback Sam Darnold and even though the team is 3-0 he has been under constant scrutiny from coaches, fans and the media due to his interception rate.

He has nine touchdowns and seven interceptions in his first three games and that’s unacceptable because he’s capable of playing much better than that.

It’s true that he usually makes good passing decisions, that some of his passes have been tipped by opposing defenders and some of them dropped by his wide receivers; but Darnold needs to protect the football better if USC wants to win this game.

A preseason Heisman Trophy favorite, he’s still one of the most electrifying players in the nation despite his interception issue.

For this game he’s going to have to be sharp and aware of his surroundings because Washington State has probably the most active defensive front he’s faced so far, this season.

Defensive linesman Hercules Mata’afa and company will be sliding pre-snap from right to left trying to give USC’s offensive line a different look in every play. Their athleticism is unique because although they’re not biggest of defensive lines they can find ways to penetrate and stop the ball carrier in the backfield.

If that happens Darnold will have to be at his best to find unique ways to throw effective and, most importantly, accurate passes.