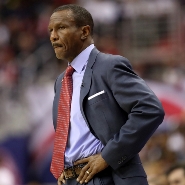 The Toronto Raptors have fired head coach Dwane Casey early today just two days after winning the Coach of the Year award and just four days after getting swept by LeBron James and the Cleveland Cavaliers in the Eastern Conference semifinals.

Having lost 10 straight games to the Cavs in the playoffs and suffered two straight sweeps at the hands of LeBron and company was enough for the team’s organization.

First reported by ESPN’s Adrian Wojnarowski, the Raptors confirmed it shortly thereafter in a statement.

Casey was going into the last year of his deal and the Raptors had to decide between extending his contract or making a coaching change. After their recent disappointing postseason results under Casey, the choice seemed obvious for them and decided to part ways with him despite the brilliant work he had done with the franchise.

In the statement, team President Masai Ujiri announced thanked Casey for his efforts and said that the coach was instrumental “in creating the identity and culture” of the team, but that he felt the change was necessary to get to the next level.

Under Casey, the Raptors won four Atlantic Division titles and advanced to the postseason in a franchise-record five straight seasons.

He was the longest-tenured coach in team history and is the franchise’s all-time winningest coach. He went 320-238 (.573) in seven seasons with the Raptors, including the only three 50-win seasons in franchise history.

Despite those brilliant numbers, Casey was fired because he failed to win in the playoffs, where he went 21-30 in seven seasons and failed to make it to the NBA Finals even once during that span.

This year’s underachievement was perhaps the most disappointing after the team won a franchise-record 59 games and earned the top seed in the Eastern Conference for the first time in franchise history.

Despite Casey’s dismissal and the disappointing end to the season the future remains bright for Toronto as most of the roster is expected to be back next season.

The Raptors want to try and make another run for supremacy in the East as they have a core of young players that have gotten better over the last few years and are expected to continue maturing and growing next year under a new coach and a new system.