Three Keys To The Steelers Defeating The Patriots In Week 15 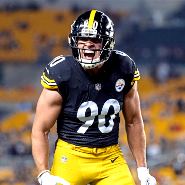 The Pittsburgh Steelers (7-5-1) are hosting the New England Patriots (9-4) on Sunday at Heinz Field and having lost six of the last seven (including the last five) to Tom Brady and company they need to find a way to beat them to make sure they stay atop the AFC North.

With that in mind here are three keys to the Steelers beating the Patriots come Sunday:

1.- Collapse the Patriots’ pocket to corral Brady: The Steelers defense has to find a way to contain New England’s offensive weapons and it all starts with Brady himself, who does a great job of moving around in the pocket and has the ability to move around whenever he feels the pressure around him. The best to harass him is to collapse the pocket and get in his face with inside penetration to disrupt his rhythm.

2.- Stop the run: No better way to beat the Patriots than to make them one dimensional and stopping the run is a good step in that direction as it limits Brady’s chances to take advantage of the play-action pass. Rookie running back Sony Michel is a physical, compact and fast player that has nice shifting abilities and knows how to run low. When he gets to the outside perimeter, Michel’s very dangerous, but he has some trouble seeing creases inside the tackles so the Steelers should try to keep him there.

3.- Stop Rob Gronkowski: The Patriots tight end is arguably the best in the game right now and the Patriots know how to get the most out of him as they move him around the field to utilize in a myriad of ways to exploit the favorable matchups and keep opposing defenses in check. The Steelers need to jam him and be physical against him regardless of where he lines up to make sure he doesn’t get a free release off the line of scrimmage. When Gronk catches the ball, the Steelers need to quickly make contact and rough him up to limit his yards after the catch because he’s one very tough player to bring down.

If the Steelers do these three things, they are likely to win on Sunday and end their five-game losing streak against them.