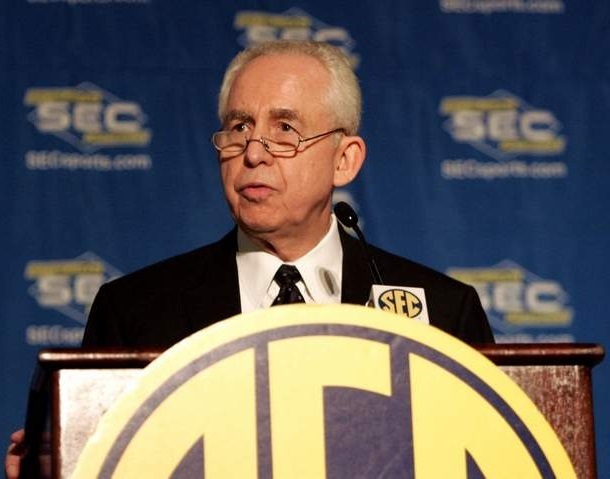 The Southeastern Conference is cashing in on its seven year domination of the NCAA National Championship Title. The long awaited SEC Network will be launched in 2014 and mega-monies will then begin to flow into the coffers of the 14 member Universities that make up the conference. Let there be no doubt, the revenue to be gained by this deal between the SEC and ESPN is worth a whole lot of money.

When SEC Commissioner Mike Slive made the formal announcement of the new deal, all 14 head football coaches where there in attendance to lend their support. And well they should. Not only will their exposure as coaches be greatly expanded by this agreement, there exists the very real probability that the salaries of the coaches themselves will take an upward turn.

And rightly so, after all, it has been the coaches and their staffs of the SEC that have led their teams to victory and dominated the national polls for as long as some younger fans can remember.

Mike Slive is the man who pulled it off. This will be the crowning achievement of his career as commissioner of the SEC. At 74 years old, Slive is still going strong and has obviously earned the respect, as well as the eternal gratitude, of every University official in the SEC and well beyond.

Of course the SEC is not just about football. All and all there were 32 coaches from various college sports representing their schools there when the announcement was made. Since 1990, the SEC has won a total of 149 national championships in various categories.

The fact that so many college coaches took the time out to attend the ceremonies speaks very highly for Mike Slive himself. As Georgia’s AD Greg McCarty said, “That says a lot about Mike Slive and how much everybody respects him. There aren’t many people who could have pulled this off.”

The new network is collaboration between ESPN and the SEC and will provide extended coverage of SEC sporting events for the most insatiable fan base in all of college sports.

When Mike Slive took as commissioner of the SEC after the legendary Roy Kramer retired in 2002, no one knew quite what to expect of him and this SEC network project was not even being discussed. Now Slive has cemented his legacy as being one of the most influential figures in the history of college sports.