THE RAMS & THE CHARGERS ARE MOVING TO HOLLYWOOD PARK

Posted on August 10, 2019 by Bobby Goodspeed in Sports News

THE RAMS & THE CHARGERS ARE MOVING TO HOLLYWOOD PARK 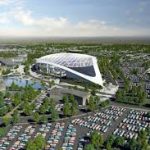 Hollywood Park was once one of the most famous racetracks in America dating back to 1938.  Many a classic movie about life in southern California includes references to the popular thoroughbred track and some even feature actual footage from actual races at Hollywood Park. Everyone from Clark Gabe to Betty Grable was there in the boxes, dressed to the nines, holding up parimutuel tickets and peaking through binoculars.

Today the site of the old racetrack is under construction on a grand scale as teams of workers and tons of equipment endeavor to build the premier venue for sporting and entertainment events in southern California, or perhaps in the whole world.

Expectations are that high. The folks behind the new facility, which will house both the Los Angeles Rams and the Los Angeles Chargers football teams of the NFL, are setting the bar high for their new ultra sleek stadium.  The estimated costs of building the new venue will exceed five billion dollars!

The giant glass roofed future home to major gala events in Inglewood, California is about 75% complete and will take most of another year to complete.  The entire project will cover 298 acres and be known as the L.A. Stadium and Entertainment District (LASED), probably the first sports venue ever to be designated a ‘district’.

The new mega sports entertainment complex, which will hold up to 70,000 fans for sporting events and a 6,000 seat entertainment venue, is the vision of Rams owner Stan Kroenke who also owns the Denver Nuggets, the Colorado Avalanche and the Arsenal football club of the English Premier League, among various others.

American Airlines is chipping in 90 million bucks to purchase naming rights to the 2.5 acre entrance to the stadium which will be called the American Airlines Plaza.  The Plaza itself will stand ten stories tall. As yet no naming sponsor has come forward to name the main stadium itself.  One can only imagine what the price tag for that one will be.

Even without an official name, the almost complete facility has already drawn the attention of the NFL and the NCAA as well as the international Olympic committee.  Super Bowl LVI will take place there in 2022 and the NCAA College Playoff Championship in 2023.

In 2028 both the opening and closing ceremonies of the Summer Olympics will be held there on the site of the old Hollywood Park Track which is scheduled to open in July of 2020.

Actually American Airlines and the L.A. Rams have an ongoing relationship since 2016 which has resulted in some fine contributions to community service in the L.A. area including building playgrounds etc.

As part of a comprehensive plan to upgrade the entire experience of the fans, American Airlines will also be investing $1.6 billion to renovate their facilities and terminals at the nearby Los Angeles International Airport which is just 3 miles from the new stadium which is located just south of The Forum, the former home of the Los Angeles Lakers and the L.A. Kings of the NHL.

Artists renderings of what the place will look like convey a very open airy atmosphere inside the building with lots of natural light while offering complete whether protection for the fans and athletes alike.