Home » Sports News » The Heat Are Adding Veteran Players in Hopes to Repeat in 2013!

The Heat Are Adding Veteran Players in Hopes to Repeat in 2013! 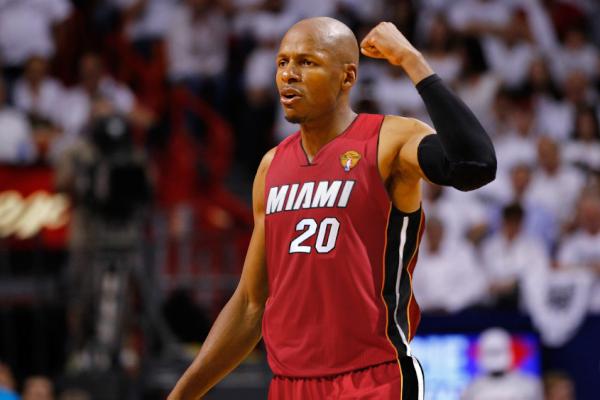 The Miami Heat are hoping for a repeat of their stellar performance this season. And just how have they decided to make that happen? By adding two reputable veteran players to their roster. While the addition of Ray Allen and Rashard Lewis took the sports world by surprise, most fans and people in-the-know think the additions were a smart choice. When you add players like these in with the likes of LeBron James, Chris Bosh, and Dwayne Reed, how can you go wrong?

Currently, the team isn’t quite sure what they plan to do with Allen, but that can all be decided in time. Even though he knew this going in, Allen jumped at the chance to be a part of the Miami Heat, as did Lewis. Allen comes to the Heat after a five season stint with Boston, including a 2008 NBA Championship win. Just as impressive, Lewis was on an All-Star team and has been playing professionally for over a decade. Lewis seems to be viewing his relocation as the next adventure in a long and fruitful career. Allen,  on the other hand, is just glad that things have finally settled down for him!

The star player has just finished recovering from surgery, and he is also getting over the Celtics’ big loss during Game 7.  Despite a tough season, the team begged him to stay, but Allen just felt called elsewhere.

Though Celtics’ fans will surely miss Allen, those who have a passion for the Heat couldn’t be happier. They think he will make an excellent addition. All of this, of course, should not overshadow the addition of Lewis. He might be an older player—a little rougher around the edges—but nothing means as much out on the field as experience, and he’s got that in bulk.

So, gear up for an exciting season where absolutely anything can (and probably will!) happen. With these two players added into the mix, things are bound to be more exciting than they have been in years. At this point, everything is looking up for the Miami Heat!