Home » Sports News » The good and the bad: LeBron James

The good and the bad: LeBron James 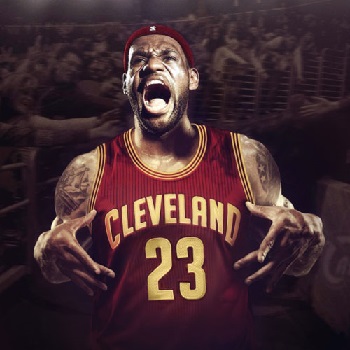 LeBron James is one of the most important players not only in the Cleveland Cavaliers but the whole NBA, but apparently when his team needs to score a winning basket or even a score in the decisive last seconds, his effectiveness decreases dramatically as seen in the last ten years he has accumulated a dismal 10.6% effectiveness in the last five seconds of a game. To be clear this moments are the win or tie for the team.

ESPN has published the statistics from active players in the league who attempted at least 25 shots to tie or win a game in the final seconds, the list reflects as the most effective player: Rudy Gay with 17 out of 38, distantly followed by Dirk Nowitzki, who has scored 13 from 38 opportunities with an effectiveness of 34%, Joe Johnson has scored 11 of 39 with 28.2%, Vince Carter scored 9 out of 32 and Damian Lillard with 28%, scoring 7 out of 25.

In this classification, LeBron is at position 20th of 21, just ahead of Jamal Crawford with an effectiveness of 10% with 3 out of 30, although in the last 10 years the player has been four-time MVP of the season. In this period the Cavs player has thrown 47 shots and has just turned five.

Stephen Curry is not on this list because in his career so far he has only played in 19 plays to win or tie a game, and has made six, 31.6%. While these listings are published depending on the key seconds for teams and only that moment, it is true that is when the team requires figures to get a win and get ahead in difficult times as the Finals.

LeBron James, one of the most important players in Cleveland Cavaliers in its franchise history and who has maintained a high average this season in which his team leads the Eastern Conference. We all know what this player can do in his performance every game and to that end seeking to improve his physical abilities took a day off given by his team to travel to Miami with his family and train with his friend Dwyane Wade.

Yes, we know about LeBron’s numbers. The star of the Cavs averaged 24.8 points, 7.4 rebounds, 7.3 assists and 1.7 steals with 49.6% in field goal. The forward scored 4 double doubles and 1 triple-double and was named MVP so the note will take a different path in the good side. James took the -Cavaliers do not play until Friday- with a trip, Wade participated in a working section, on Wednesday at the DBC Fitness gym with his personal trainer David Alexander. “I work out a lot and the gym helps me recover,” said D-Wade, and ensured that “LeBron is one of my best friends, so it’s not uncommon to work out with him,” said the Heat player to several reporters.

The former Miami Heat player comes to have that feeling of champions left behind when he returned to Cleveland in the summer of 2014 and since then, James has been unable to beat the Florida team adding three defeats at the American Airlines Arena, in the sunny city.

It should be remember that Alexander, James personal trainer, Wade has lost about 22 lbs. this summer and since then has not had any problems with his knee in the season, although it is not known whether this visit has something more than just a meeting of camaraderie or if there is something behind the outing.

As stated, frequently these two players spend holidays together when the season comes to an end and spend as much time as possible together while the league is still in full action, considering the four years played at Miami Heat, James has clearly created a very strong bond with Wade, who also shared the previous season as he recovered from back and knee injuries.