Home » Sports News » The Evolution Of NBA Sneakers Part One

The Evolution Of NBA Sneakers Part One 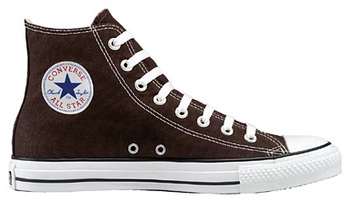 From the time they came out, way back in 1917, Converse’s “Chuck Taylor” style shoe was the most popular sneaker in the game of basketball. To tell the truth, it was just about the only shoe available for basketball players to use.  They were call tennis shoes back in those days and almost everyone, both amateur and professional, had at least one pair.  There was only one color, canvas white.  The very first tennis shoe featured a canvas top and a rubber sole…..actually they still do!  Converse All Stars held the lion’s share of the athletic shoe business for over 50 years.

The first shoe to really be called a basketball shoe was produced in 1972 by Nike when it came out with the Bruin. This was a true revolution in foot wear for athletes.  The tops were made of leather trimmed in suede.  Like the All Stars, just about everyone you know had a pair of these at one time or another.

In 1973 Puma came out with a customized basketball shoe made for Clyde Frazier of the New York Knicks.  Right underneath the Puma logo was the name “Clyde” written in gold script.  These shoes marked the first signature sneaker in the history of basketball. Although it was never a big hit with NBA players, the “Clydes” design influenced many of the walking shoes still worn today.

Converse debuted their first modern basketball shoe in 1976 with the Dr. J Pro Leather.  It also featured, in gold text again, the “Dr. J” nickname of NBA legend Julius Erving. They are called by some “the shoe that ushered in the modern era of the basketball shoe.”

Then in 1978 Nike came out with the Blazer which quickly became the standard of the industry and the forefather of the iconic lines of sneakers that were to follow like Air Force and the Jordan line. They were the first real high tops and the basic style is still being made and sold to this day.

Lakers great all pro Michael Jordan was the inspiration for the most iconic basketball shoes of all time.  In 1985 Nike produced the “Air Jordan I” and the rest is shoe maker history.  No one in the world that has a real collection of basketball shoes bypassed the Air Jordans.  They will forever hold a sacred spot in the sneaker hall of fame.