Posted on October 18, 2019 by Bobby Goodspeed in Sports News 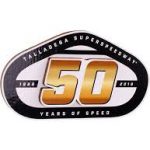 NASCAR these days runs on all kinds of tracks from the half mile short tracks at Dover and Martinsville to the big two mile plus tracks at Daytona and Kansas.  But the biggest, the baddest and the most anticipated track of them all is down in Alabama at Talladega.

They have been racing, and trading paint, at Talladega for the past 50 years and the 2.66 mile tri-oval track has undergone some drastic improvements over the years; which is a good thing, because Talladega is still one of the fastest venues on the NASCAR schedule each and every year.

So much so that Talladega runs under what NASCAR calls restrictor-plate-racing. This means that all entries are restricted by a handicapper device installed on the engine of the car to restrict its top speed from being achieved.

What that works out to on race day is that all of the cars participating in the race at Talladega will be running at almost the exact same top speed, which is known to be a contributing factor in those spectacular multi car crashes we see so much of on TV.  It’s one of the major attractions of NASCAR racing.

NASCAR’s big wrecks seem to be the most interesting part of the race for the guys presenting the clips for Sports Center etc.! That’s often all we see on TV.  Thankfully the technology for protecting the drivers in these often horrific pileups has advanced to the point that it is seldom that the drivers are actually injured, even though it often seems like no one could have survived the 200 mile an hour crashing and flipping and smoking and burning mess we see on TV.

The grandstands at Talladega will hold about 80,000 avid race car fans with room for an additional 95,000 or so in the infield where campers and trailers of every description are parked for the duration of the festivities in what ends up being one huge tailgate party every year at the annual Talladega race.

The tri-oval track was built in 1969 on the site of the former Anniston Air Force Base, which is actually located in the small city of Lincoln, Alabama, just outside of Talladega by the France Family and their International Speedway Corporation. NASCAR founder Bill France Sr. wanted to fulfill his dreams of building a track for USA stock cars to compete on that was longer than the big one at Daytona, which is 2.5 miles around.

The big track at Talladega turned out to be a 2.66 miles, or 4.28 kilometers, long oval track which has become one of the mainstays of American Stock Car Racing.  It was known as the ‘Alabama International Motor Speedway’ up until 1989 when the facilities name was changed to the ‘Talladega Superspeedway’, which sounds much cooler anyway.

With its banked turns and three long straightaways, speeds of over 200 miles per hour are regularly achieved at Talladega with NASCAR driver Rusty Wallace holding the track record of over 216 mph back in 2004, before the restrictor plates were used at Talladega.

For 2019 the pole sitting favorites to win at Talladega are Kevin Harvick and Kyle Busch, both listed at 9-2 going into the weekend. However, this years’ NASCR points leaders Martin Truex Jr., Brad Keselowski, Kyle Larson and Joey Logano are right on their heels at 6-1 with only six races to go in the 2019 NASCAR Playoffs.

The stakes are high at Talladega!