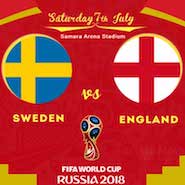 The first game on Saturday for the quarterfinals of the 2018 FIFA World Cup in Russia features England and Sweden playing at the Cosmos Arena in Samara, Russia.

England may have problems mounting attacks against the disciplined Swedish team. After all, the three Lions had difficulty creating offensive opportunities, launching forward passes and finding spaces against Colombia, which is less solid and organized than Sweden.

If England wants to win this game they will have to try to take advantage of the set pieces to surprise the compact Swedish defense, which doesn’t break easily.

If England opens the score in this fashion you can expect Sweden to launch forward in search of the equalizer and leave open spaces in the back, which England could then profit from to double their lead.

England’s defense although not as good as Sweden’s is quite solid. Although they have conceded one goal per game, they have looked solid and managed to stay cool and calm in dire situations as proven in the round of 16 against Colombia.

Sweden’s best players are Marcus Berg and Nils Ola Toivonen in the attack and in defense Mikael Lustig and Andreas Granqvist. Sweden’s defense has also been near the top of the tournament as it has just allowed two goals in their first four games and they came against Germany in the group stage.

Where the Swedes struggle is on the attack, where they lack the players and firepower to score consistently and quickly.

At times Sweden’s offense has looked disorganized and short of ideas to mount quick and deadly counter-attacks. If they fall behind on the score is unlikely they can recover from the blow and thus will end up going home while England advances to the semis.


Sweden’s Road to the Quarterfinals:


England’s Road to the Quarterfinals: