Posted on February 3, 2014 by admin in Sports News 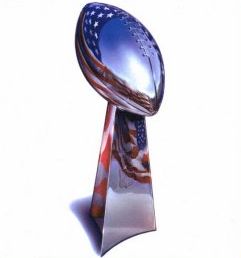 So much history and tradition go into the 38 year old story of the Super Bowl.  Here’s a quick look at some of the finer points that keep the big game so interesting after all this time.

After the reams of words written about how horrible the weather was going to be up in East Rutherford for the big game, it turned out to be almost a picture perfect football day. Sure it was a little cold, but the temperature at MetLife Stadium at kickoff was higher that it was in either Seattle or Denver.

This was a good thing as an estimated 80,000 Super Bowl ticket holders arrived at the game via public transportation. Neither Taxis nor Limos were allowed near the Stadium this year. Believe it or not, the coldest Super Bowl on record was played in New Orleans at Tulane Stadium in 1972 when the Cowboys beat the Miami Dolphins by a final score of 24-3.

The Broncos tempted fate by wearing their orange home jerseys for Super Bowl XLVIII. They had good luck (9-1) with the orange this season but somebody forgot that in their 3 previous Super Bowls they also wore the orange jerseys and they lost all three games. In fact they were outscored 124-30 while wearing the orange.

This year the members of the Seattle Seahawks football team will each take home a nice $92,000 bonus for winning Super Bowl XLVIII and even though the Broncos lost the game, they will each be awarded $46,000 for their efforts. Not a bad payday, even for the losers. Players on both sides will now have to deal with the New Jersey tax man whose rates could go as high as 102% on their earnings!

Such small change issues will not be bothering the owner of the Seattle Seahawks.  Microsoft co-founder Paul Allen is worth $15.6 Billion which makes him about 3 times richer than any other NFL owner today. No wonder these guys don’t have any trouble paying Roger Goodell $30 Million a year to run the NFL for them.

It is reported that the Fox Network was charging advertisers a cool $4,000,000 for a 30 second commercial spot during Super Bowl XLVIII. Big bucks all around!

In an interesting final note, Governor Chris Christe of New Jersey took to Twitter before the big game with a warning to would-be ‘johns’ that prostitution is no more acceptable during Super Bowl week that the other 51 weeks of the year. I wonder what prompted that one.