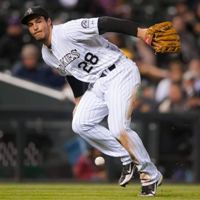 The Orioles, Mets, Rays, Phillies and Reds were among the teams that already opened their Spring training camps for the the 2017 season.

Although during these first few days is common to see mostly pitchers and catchers starting their preparation, many other position players went ahead and began their training as well. Among those, Colorado Rockies’ third baseman Nolan Arenado, who was seen taking batting practice.

Zack Wheeler, who has spent two seasons without pitching for

the Mets, was one of several pitchers who was seen having his first bullpen session.

In other news Detroit Tigers closer Francisco Rodriguez has already solved the problems he had getting his work visa and will be able to join the Tigers training camp in Lakeland, Florida, on time.

Rodriguez wrote in his Instagram account that he was already on his way to Lakeland, where he was expecting to finish his preparation for both the World Baseball Classic (March 6-22) and the regular season opening day where he’s expected to fulfill a key role in the Tigers bullpen.

The Saint Louis Cardinals received some bad news as they were told that pitcher Alex Reyes, who was also expected to pitch with the Dominican Republic team in the World Baseball Classic, will undergo Tommy John surgery and will miss at least the entire 2017 season.

Cardinals’ GM John Mozeliak, confirmed the diagnosis after Reyes underwent an MRI test. Reyes missed a session in the bullpen scheduled for Tuesday due to pain in the right elbow.

The 22-year-old pitcher made his big-league debut on August 9, had a 4-1 record and a 1.57 ERA in five starts and seven relief appearances.

Reyes who was a candidate to fill the last available spot in the Cardinals rotation, felt pain in the days prior the opening of Spring training.

Venezuelan pitcher Felix Hernandez, started working with his Seattle Mariners teammates on Tuesday at the Mariners camp in Peoria, Arizona, intent on proving people wrong and that he can leave a disappointing 2016 campaign behind.

The 30-year-old, who will join Venezuela in the World Baseball Classic, has passed without any problem the physical tests and is optimistic about his 2017 campaign saying that he feels healthy.

A leg injury prevented Hernandez from playing a full season and hampered his performances; as a result, he finished the 2016 campaign with a 3.82 ERA and an 11-8 record.

Hernandez will continue working at the Mariners Camp before reporting with Venezuela’s manager Omar Vizquel to start preparing for the World Baseball Classic opener against Puerto Rico.