Sharapova Defeats Vinci In Stuttgart For First Win in 15 Months 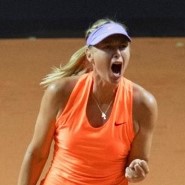 Russia’s Maria Sharapova reappeared on Wednesday after 15 months away from the courts for a doping ban, with a two-set win (7-5 and 6-3) against Italy’s Roberta Vinci in the first round of the Porsche Grand Prix in Stuttgart, Germany.

The Russian won the first set after trailing 0-2 at the start. After leveling the set at 5-5, Sharapova managed to break before making it 7-5 with her serve.

Although Sharapova was nervous from the start she recovered and little by little managed to take control of the first set. Although Vinci arrived to this duel beaming with confidence and having more competition, Sharapova managed to calm her nerves and win the first set under an hour.

In the second set, Sharapova broke the service of her rival in the first and last games to close the victory with a 6-3 in an hour and 43 minutes.

Sharapova, who won this tournament in 2012, 2013 and 2014, made her triumphant return to tournament play after a fifteen-month ban handed for failing a drug test for the illegal substance Meldonium.

The previous match for the Russian player, who was once the world’s number one for 21 weeks, was in the quarterfinals of the Australian Open 2016, where she fell to American Serena Williams.

Now the Russian, who just turned 30 and has won five Grand Slam tournaments in her career, will face fellow Russian Ekaterina Makarova in the round of 16, who on Tuesday defeated seventh seed Agnieszka Radwanska, of Poland.

Sharapova, who plays in Stuttgart thanks to a wildcard, also received invitations to the Madrid and Rome tournaments. During her ban, she ignored the protests against her and prior to this event she kept a low profile during the last few days.

Sharapova worked behind closed doors in a private club in Stuttgart and barely shared a couple of photos of her practices with her fans on social media.