Sharapova Defeats Babos To Reach Round of 32 At US Open 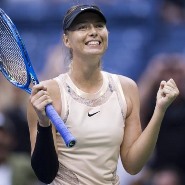 Russian tennis player Maria Sharapova continues on a winning path at the US Open as she defeated Hungarian player Timea Babos in three sets at the US Open 6-7, 6-4 and 6-1.

The former world number one, who stunned Romania’s Simona Halep in the first round, confirmed that her 15-month ban for abusing illegal substances did not affect her and instead she used it to regain her best physical form.

Having lost the first set in the tiebreak, Sharapova reduced her errors and found her better serve in the second and third sets, paving her way to victory in two hours and 19 minutes.

The 2009 US Open champion and winner of five grand slam tournaments used her sharp serve to win, as she at one point in the game had 12 straight aces. Although Sharapova made six double faults, she overcame her 36 unforced errors with 39 winners.

Babos instead made 24 unforced errors and hit just 13 winners, as she also failed to produce any aces and had a double fault.

Sharapova, who is playing in her tenth US Open, will play in the next round against the winner of the game between Americans Sachia Vickery and Sofia Kenin.

Poland’s Agnieszka Radwanska advanced to the second round with a 6-4 and 7-6 victory over Croatian Petra Martic and Spain’s Sara Sorribes lost to Japan’s Kurumi Nara 6-2 and 6-1. The Japanese player will play Kuznetsova in the second round.