Schwartzman Lacks The Skills To Give Nadal Much Trouble 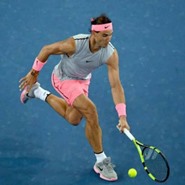 Rafael Nadal continues to plow his way through the Australian Open with absolute ease as he demolished Bosnian Damir Džumhur (6-1, 6-3 and 6-1) to advance to the round of 16, where he will face Argentinian Diego Schwartzman.

The Argentinian, who is ranked 26th in the world, is brilliant at hitting the ball hard and consistently and he’s a great groundstroke player. That asset won’t help him much against Nadal though as he’s one of the greatest groundstroke players ever.

Nadal’s consistent all over the court at getting the ball back into play as he can strike one forehand after another until he breaks players down. For the Argentinian to go head-to-head against him is one of the worst scenarios he can face because they have very similar games, with Nadal, of course, being several levels up.

A massive problem for Schwartzman will be trying to figure out a way to beat Nadal in this matchup. These players have met three times before (the most recent being last year at Monte Carlo) and the Spaniard has won all of them without even dropping a set.

Schwartzman could get a set, but if that happens that’s more likely to indicate that Nadal is either not at the top of his game or he’s dealing with an undisclosed injury. The Argentinian is likely to give Nadal more problems than Džumhur, but he will not be significantly tougher.

Schwartzman has been playing fairly decent, but still, not many people expected him to get this far. After proving his critics wrong it would be shocking to see him advancing past Nadal.

The Spaniard is, so far, playing at a higher level than the one he showed in this tournament last year when he reached the final. This year Nadal’s serve has been more lethal, as he’s been way more accurate with it, and his forehand seems to be much more powerful.

This game will most likely be another three sets win for Nadal as it would be unlikely to see Schwartzman finally claiming a set as Nadal is on a far superior level. As a result, the Spaniard should progress relatively unscathed to the quarterfinals, where he will face much tougher opposition.