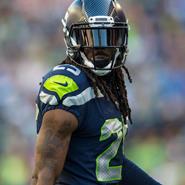 For the seven years of his entire NFL career cornerback Richard Sherman has been an integral part of the Seattle Seahawks defense, but that’s about to change as he was released by the team on Friday.

Sherman, who’s been an iconic player for the Seahawks for almost a decade, will be a free agent. Sherman has had more interceptions (32) and passes defended (99)  than anyone else since 2011 is the latest victim of Seattle’s offseason renovation, which on Wednesday shipped defensive end Michael Bennett to the Philadelphia Eagles.

These moves effectively put an end to Seattle’s Legion of Boom defense as other members of the legendary unit are either nearing the end of their contracts or dealing with injuries.

The 2018 status of Kam Chancellor, another member of the famous defense, is uncertain after he suffered a neck injury in week ten of last season as is not yet known if he will be cleared by his doctors to play again. To make matters worse, Cliff Avril is facing a similar situation as he’s also dealing with a potentially career-ending neck injury.

Earl Thomas is in the last year of his contract and while he will most likely spend this year with the Seahawks it’s anybody’s guess what will happen with him after the season.

Sherman, a four-time Pro Bowler who will turn 30 on March 30, will now be able to explore free agency to try and sign with another team. The Los Angeles Chargers, Oakland Raiders, New England Patriots and Atlanta Falcons are among the teams that have been mentioned in the media as possible landing spots for Sherman.

The Legion of Boom helped Seattle reach the Super Bowl in back-to-back seasons and win their first Lombardy Trophy in franchise history. In 2014 they routed the Denver Broncos 43-8, and in 2015 they lost to the New England Patriots 28-24.