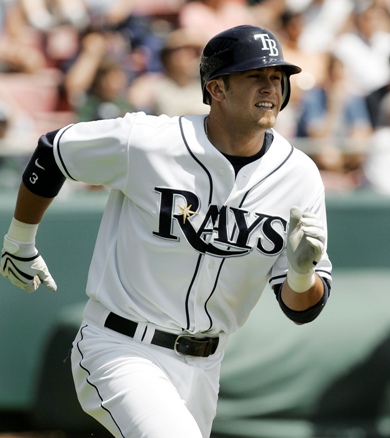 Evan Longoria liked the idea of finishing his career with the Rays. He and the club shared that vision, resulting in a contract extension that could keep the All-Star third baseman in a Rays uniform through the 2023 season.  Longoria might have gotten more money in the future, but he wanted to show that he was committed to the Tampa Bay Rays organization.  Longoria’s new contract incorporates the salaries for 2013-16 from his original contract and extends six more years through 2022 for an additional $100 million. The deal includes a club option for 2023.

“This is a very exciting day for us, for Evan to have the confidence in us and for us to have the confidence in him to re-up, so to speak, for the long haul is quite exciting and we’re looking forward to a lot more great things going forward,” said Rays principal owner Stuart Sternberg.  Sternberg noted that the Rays drafted Longoria with the belief that he and the organization would “grow with each other and together accomplish great things.”

The Rays selected Longoria with the third overall pick in the 2006 First-Year Player Draft, making him the first player drafted under Sternberg and Rays executive vice president of baseball operations Andrew Friedman. On April 18, 2008, only six games into his Major League career, the Rays signed Longoria to a multiyear contract worth a guaranteed $17.5 million over six years and potentially $44 million over nine seasons, including the club options for 2014-16.

“Evan has clearly become a cornerstone player and a fixture in our organization. We are proud of what we have accomplished these past seven years, and I expect the best is yet to come.”  “I think we knew the significance that Evan has on this team,” Friedman said. “It goes beyond just what he can do in the batter’s box. He’s a premier defender at third base. He has value on the bases.

The 27-year-old Longoria is a three-time American League All-Star, two-time Rawlings AL Gold Glove winner at third base and was the 2008 AL Rookie of the Year. After five seasons, he already ranks second on the Rays’ all-time list with 130 home runs, third with 456 RBIs and fourth with 161 doubles.

Longoria is one of 11 active players to average at least 25 home runs and 90 RBIs over his first five seasons.