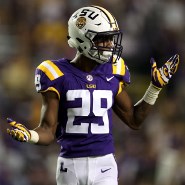 With college football practically a week away we’re going to take a look at what we expect will be some of the most relevant defensive players in Division I ahead of the 2018 season.

These are players expected to be game changers, future stars and some of them are very strong candidates to become top picks in the 2019 NFL draft.

5.- Andraez Williams (CB, LSU): “Greedy” is one of the best cornerbacks in Division I going into the college football season with long-range talent. He’s expected to be a top-5 pick in next year’s NFL draft as he already is a prototypical player built to play man coverage, however, he’s multi-talented and skilled enough to do anything defensively, which is a very high commodity in today’s NFL.

4.- Nick Bosa (DE, Ohio State): The younger brother of Los Angeles Chargers’ defensive end Joey Bosa is a very physical freak of nature. A big-time defensive end that plays with a lot of energy throughout the game and is very skilled in the pass rush. He’s a rare college football player that gets to the line of scrimmage quickly to shut down the run and has an outstanding technique coming off the edge to apply pressure to the passer.

3.- Rashan Gary (DL, Michigan): A very versatile defender that was a number one ranked player coming out of high school. He can play at defensive tackle and defensive end that owns a set of skills that have people comparing him to defensive end Aaron Donald. He can get physical and play any position in the defensive line, which makes him a very high-value pick for next year’s NFL draft.

2.- Ed Oliver (DT, Houston): He’s phenomenal rushing opposing quarterbacks as he possesses great power and quickness at the snap. Although he weighs over 290 pounds he’s a dominant and explosive with enough speed to keep track of the football across the field as a linebacker. He’s a rare interior guy that is dominant both stopping the run as he is getting after the passers and was recently named the top upcoming player for the 2018-19 season.

1.- Devin White (LB, LSU): A top linebacker going into the season that finished 2017 with 133 total tackles and 4.5 sacks. He’s one of those few players in college football that can be considered a game changer and a closer as he managed to create big plays to help clinch several games for the Tigers. Along with “Greedy” Williams, Devin White was one of two LSU Tigers projected as first-round picks in the 2019 NFL Draft as early as May of this year.