Posted on August 30, 2019 by Bobby Goodspeed in Sports News 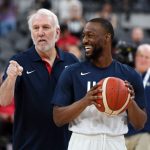 Basketball, like Soccer, is now played in every corner of the planet, largely because of the simplicity of the requirements to play the game. International competitions get tougher and tougher each year for the previously dominant Team USA. It used to be easy for all those NBA guys, but not anymore.

For one thing, there are a lot of NBA players on rosters today from outside the USA.  Fortunately they are scattered around so as not to represent a single threat to Team USA.  Still, the boys from the American team will feel the loss.

The ‘Amateur’ was dropped in 1989 but the Federation remains the governing body which specifies and defines the rules of international basketball today as well as overseeing that standard equipment and facilities are used worldwide.  These folks also supervise the international transfer of basketball players and are responsible for the appointment and control of international referees.

The FIBA Basketball World Cup, like the Olympics, only takes place every four years when teams compete for the Naismith Trophy, which is named after Canadian James Naismith who created basketball as we know it today. Team USA has not lost the Naismith Trophy since 2006 and has high aspirations to win it all again when the two week competition is all said and done.

Legendary Coach Mike Krzyzewksi of the Duke Blue Devils ran Team USA for a decade and brought home Gold Medals from the last three Olympic Games and two World Championships. Last year he handed over the reins to Greg Popovich of the San Antonio spurs whom many consider to be the best coach in the NBA.

Popovich will have a stellar lineup of assistant coaches on Team USA featuring Steve Kerr of the Warriors, Lloyd Pierce from Atlanta, and Villanova head coach Jay Wright. So then, no problem in the coaching department. There has however been some attrition from the rank and file of Team USA players.

Unlike USA Teams in the past, the 2019 edition will not be filled with super-stars.  LeBron James will be off filming Space Jam, however, he has expressed interest in playing on the 2020 USA Olympic Basketball Team.

The Warriors’ Stephen Curry announced that he was taking the summer off after winning five straight trips to the NBA Finals, he needs his rest.  Golden State teammates Kevin Durant and Klay Thompson are still nursing injuries and Kawhi Leonard is still trying to get his left leg working right again.

Paul George, who broke his leg in a Team USA scrimmage five years ago, declined the invitation to join Team USA as did Anthony Davis of the Lakers, James Harden of Houston, Russell Westbrook and Kyrie Irving.

Even the number one overall pick in last years’ NBA Draft, Zion Williamson, told the press he was going to focus on winning an NBA Championship this season with his new team, the New Orleans Pelicans.  It seemed for awhile there like all the big names were dropping out of Team USA competition.

Fortunately, the USA is full of over the top basketball talent and there were still quite a few elite players willing and eager to represent the USA in the FIBA World Cup Tournament this year. After four warm up games in which Coach Popovich used a different roster for each game, Team USA is finally down to a 12 man roster.

Kemba Walker of the Boston Celtics and Donovan Mitchell of the Utah Jazz will likely be the starting ball handlers for Popovich with Khris Meddleton of the Milwaukee Bucks and Harrison Barnes of the Sacramento Kings holding down the wing positions.  Mason Plumlee of the Denver Nuggets will probably be starting at center as he is the only big man on the roster with any international experience at all.

Filling out the team are Marcus Smart of the Celtics and Derrick White of the Spurs along with Jayson Tatum of the Celtics, Joe Harris of the Nets and Jaylen Brown of the Celtics.  Back up big men are Miles Turner of the Pacers and Brook Lopez of the Bucks. Four of the 12 man roster are Boston Celtics.

Even after the withdrawal of so many USA super-stars from Team USA, Las Vegas Sportsbooks are still listing Popovich and crew as favorites to win the FIBA once again in 2019.