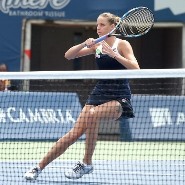 Czech Karolina Pliskova (first in the WTA rankings) advanced to the quarterfinals of the Rogers Cup in Toronto after Japanese teenager Naomi Osaka withdrew with an abdominal injury.

After a very hard first set against the world’s number one, the 19-year-old Japanese mounted a comeback to win the second set’s tiebreak to force a third and defining set, however, an acute abdominal pain prevented her from continuing and withdrew with the score 6-2, 7-6 and 1-0 in favor of the Czech.

The 25-year-old Pliskova will look for a spot in the semifinals against Denmark’s Caroline Wozniacki who beat Polish player Agnieszka Radwanska 6-3 and 6-1.

Romanian Simona Halep, ranked second in the WTA, advanced to the quarterfinals of the Toronto tournament, with a dominating 6-1 and 6-0 win over Czech Barbora Strycova (ranked 26th).

With this victory, the Romanian player will now look for a spot in the semifinals against Frenchwoman Caroline Garcia, who won in two sets 6-4 and 6-2 against American Catherine Bellis.

On the other hand, Garbiñe Muguruza of Spain will play her next match against Australian Ashleigh Barty and American Venus Williams will face Ukrainian Elina Svitolina.

Meanwhile, Williams reached the round of 16 by defeating Czech Katerina Siniakova 7-5 and 7-5.