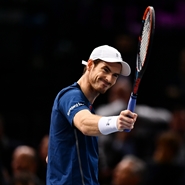 Briton Andy Murray lost to young Croatian Borna Coric in the second round of the Masters 1000 in Madrid on Thursday, while Serbian Novak Djokovic reached the quarter-final and is trying to win back-to-back titles in the Spanish capital.

Murray, who lost 6-3, 6-3, continues to struggle this season in which he has failed to get into the quarters of any of the last three Masters he’s been part of, in addition to being eliminated also in the round of 16 of this year’s Australian Open.

The world number one was uncomfortable on Thursday against his 20-year-old opponent, who had already beaten him once in 2015.

Coric broke Murray’s serve in the seventh game of the first set to take a 4-3 lead. After winning his serve to take a 5-3 lead and with Murray serving, the Scot conceded three break balls, of which he could only save two before leaving the ball in the net to lose the first set 6-3.

In the second set, Murray multiplied his mistakes and allowed Coric to break his serve once again in the eighth game, which allowed him to take a 5-3 lead before serving to win the match 6-3 once more.

Murray’s loss was the upset of the day after Novak Djokovic used an hour and 33 minutes to beat Spaniard Feliciano Lopez 6-4 and 7-5. The Serbian, world number two, was more solid against Lopez than in yesterday’s match against Spaniard Nicolas Almagro.

Djokovic will take part in the quarterfinals of Japanese Kei Nishikori, who had previously defeated Spaniard, David Ferrer. Nishikori, ranked eighth in the world, beat Ferrer 6-4 and 6-3 in a game that was easily dominated by the Japanese player.

In the women’s side, Romanian Simona Halep, current champion of the tournament, won with ease against American Coco Vandeweghe 6-1, 6-1.

Halep will play Friday for a place in the final against Latvia’s Anastasija Sevastova, who beat Dutchwoman Kiki Bertens 6-3, 6-3.

Frenchwoman Kristina Mladenovic has already secured her place in the other women’s semifinal with a 6-4, 6-4 win over Romania’s Sorana Cirstea and on Friday will play Svetlana Kuznetsova who on Thursday defeated Canadian Eugenie Bouchard 6-4, 6-4.