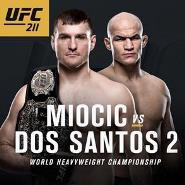 already gave us five great rounds of MMA fighting on December 13,2014. Now more than two years later the second chapter of the story will take place on May 13 at the American Airlines Center in Dallas, Texas, as the main event of UFC 211.

The first fight was evenly matched and almost pure boxing. Miocic’s boxing proved to be up to speed on that occasion, his footwork and handling distance were excellent; but JDS used his experience to his advantage, never got frustrated, worked with patience and in the end, took the victory.

Today Miocic, the reigning champion, has more knowledge of his weapons, of how and when to use them, and when’s the right moment to be more aggressive during the fight. That and the belt should make him the favorite.

During their previous fight, although they continued attacking, they slowed significantly after the third round, however, dos Santos was superior in handling and saving energy, in fact he connected more hits during the fifth round than any other, Miocic was just fortunate enough to withstand them to avoid a knockout.

Since that time Miocic has earned four straight victories, including one that would give him the title and a successful defense in his native Cleveland.

JDS is a dangerous opponent that stands out for his KO power among heavyweight fighters, but since Miocic endured his power and avoided it wisely in their previous fight, he must be prepared to attack with combos and a lot of movement during the entire fight.

Junior is still experienced. Although he looks for the KO in all of his fights, he knows when to use his other abilities. Look for him to be aggressive from the start as this could be his last opportunity to win another title fight and could look to end the bout in the first two rounds.

Miocic could try, in addition to taking advantage of the clinch, to land a few powerful kicks, use takedowns and elbows to win this combat. It is not enough to be an excellent boxer against someone like dos Santos, so expect to see the champion making use of all his weapons.

This rematch promises to be a much better fight than the first one, making this an event not to be missed.