Posted on December 1, 2016 by admin in Sports News 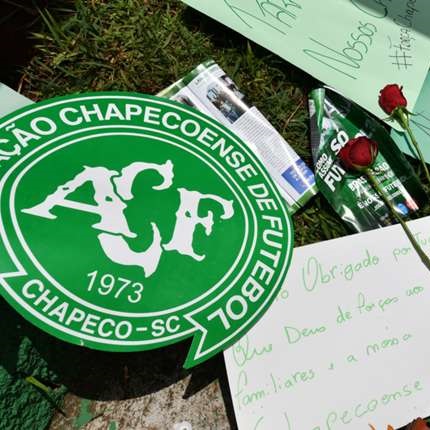 On Monday night a charter flight carrying the players and staff of the Brazilian club Chapecoense, among 81 passengers, crashed in Colombia killing 76 people and leaving only five survivors.

The humble Brazilian soccer club was ready to play its first final in an international tournament, a milestone that surprised an entire continent. The meteoric rise from Brazil’s lower divisions was something inspiring to even those who were not fans of the small club.

Headquartered in the city of Chapecó, Santa Catarina state, in southern Brazil, “The Hurricane of the West”, as they call the team, came to the top of Brazilian football in 2014 and two years later qualified for the final of the Copa Sudamericana, the second most important South American tournament, against Colombia’s Atletico Nacional of Medellín.

After some bad administrations, in the early parts of this century, the managers of the club decided to change the official name of the team to clean the debts and restart with a long-term project that bore fruits in very little time.

In 2007 Chapecoense already tasted what it was like to clinch a title as they won the state championship and a year earlier the Santa Catarina Cup. Those victories helped the club grow after facing economic problems that almost made the club disappear.

Such is the modesty of this club that the board of Chapecoense had to look for a venue to play a home game of the Copa Sudamericana because its stadium, the Arena Condá, could not fulfill the requirements of the South American soccer authorities as its maximum capacity is below 40,000 fans.

The relatively young team was established on May 10, 1973 and most of its history had been spent in lower categories competing in state tournaments.

With their promotion to the Brazilian Championship they became the reference and iconic team of a state without major clubs at regional level.

In their first year in the top division of Brazilian soccer, they qualified to play the Copa Sudamericana and reached the quarterfinals, where they were defeated by the prestigious Argentinian club River Plate.

Chapecoense did not waver in their effort to shock the world in international tournaments and were at it again this year, beating Argentine teams Independiente and San Lorenzo en route to the final.

Now their quest is over, stopped not by an opposing team, but by an unfortunate twist of fate. The club is being remembered as an example to all the small teams of the world that face adverse circumstances and lack the economic power to compete.

Although they never had the chance to become South American champions on the pitch, they proved they already were champions in life, the main reason why their opponents, Atletico Nacional, have asked the South American soccer authorities to hand the title (and its economic prize) to the small Brazilian club and the families of the victims.