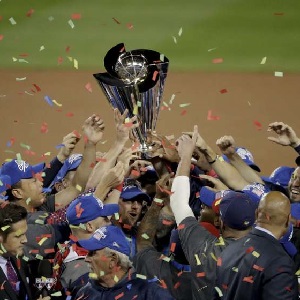 Marcus Stroman, the young right-handed pitcher of theToronto Blue Jays was one of the key players that helped the United States win the World Baseball Classic after defeating Puerto Rico 8-0 in the final at Dodger Stadium in Los Angeles.

This was the first time the American team wins the international competition after failing to do so in the first three editions (2006, 2009 and 2013).

In Stroman, the Americans found a pitcher with great control and a dominant ability to defuse the powerful Puerto Rican bats.

Stroman struck out three, walked one and allowed a hit in six innings of work and dsoing an outstanding job containing the bats of important sluggers such as Carlos Beltran, Yadier Molina and Francisco Lindor.

The United States proved in this World Classic that manager Jim Leyland chose correctly as the talented group of pitchers that he chose became one the best of the tournament. This was once again evident after Sam Dyson, Pat Neshek and David Robertson took care of business to finish Stroman’s good work.

After claiming the WBC title, Leyland can now boast of having won two of the most important trophies in baseball: the WBC trophy and the World Series with the Florida Marlins in 1997.

Leyland who had retired in 2013 after managing the Detroit Tigers and Miguel Cabreracame back to finish his career in style giving his country this trophy and a great joy to the American baseball fans.

Other key contributors for team USA were Christian Yelich who scored a team best seven runs and provided some solid batting with nine hits; Brendan Crawford who drove in six runs and had a batting average of .385; and Eric Hosmer who in 26 at bats had 10 hits, five rbis, a .385 batting average while slugging .615 and scoring six runs.

On the other hand, this was Puerto Rican manager Edwin Rodriguez second consecutive loss at the WBC final, leaving his team once again at the verge of another title. In 2013 with Rodriguez also at the helm, Puerto Rico lost to the Dominican Republic 0 -3, and has now allowed 11 runs and scored none in its two consecutive WBC finals.