Posted on September 9, 2013 by admin in Sports News 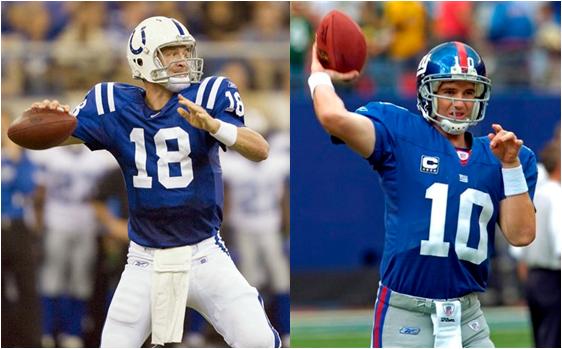 The 4:25 pm (EST) game on Sunday afternoon will carry an added degree of interest to true football fans as the two most famous brothers in football go head to head at the MetLife Stadium in East Rutherford, New Jersey… the future site of Super Bowl XLVIII.

Peyton & Eli Manning were raised to play football by their father Archie, a former quarterback for the Saints and now a widely respected sports analyst. We have all seen the early films of them playing around with footballs as babies. The early exposure must have worked out because both brothers are now highly successful NFL quarterbacks with multi-million dollar contracts and Super Bowl rings to prove their prowess on the gridiron.

Sunday’s matchup will come in only the second week of pro football action this year with both brothers coming off of exceptional passing games.  Peyton and the Broncos soundly beat the defending World Champion Baltimore Ravens in the season opener on Thursday Night Football with Peyton passing for 462 yards and 7 touchdowns… just to get the season started off on the right foot.

Eli and the Giants took on the Dallas Cowboys at Arlington and Eli threw for 450 yards and 4 touchdowns… and lost the game… thanks to five turnovers which included 3 interceptions thrown by Eli.

So the brothers go into battle next week with a total of 912 passing yards between them in the first week and each determined not to let his brother…older or younger…get the best of him.  The Mannings are a very competitive bunch and the Over might not be a bad wager. The early line has the Giants as three point underdog to the Broncos.

Elsewhere on Sunday we have a long awaited matchup between Russell Wilson and the Seattle Seahawks who will host the San Francisco 49ers and the explosive Colin Kaepernick.  Handicappers are giving Seattle 3 points in this one.

The Atlanta Falcons will be 5.5 point favorites coming off a tough road loss to the Saints down in New Orleans when they play host to Sam Bradford and the St. Louis Rams who just snuck by the Arizona Cardinals last week.

Another interesting line has Aaron Rogers and the Green Bay Packers as 6½ point favorites over the Washington Redskins and RGIII while the big game between the Cowboys and the Kansas City Chiefs up at Arrowhead is currently offered as a pick.