Lopez Comes Back Against Berdych To Reach Stuttgart Semis 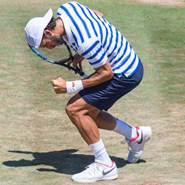 Spaniard Feliciano Lopez qualified brilliantly for the semifinals of the Stuttgart Open after coming back from a set down against Czech Tomas Berdych to win in three sets 6-7, 6-3 and 6-4.

After enduring what so far had been a complicated season, the Spaniard has looked reenergized playing on grass, his favorite surface, and managed to win his match against Berdych in a little over two hours.

Lopez reached his first semifinals of the year and now will play for a spot in the final against German Mischa Zverev, who defeated his compatriot Tommy Haas, 6-4 and 6-4. Haas had pulled a huge upset of Swiss star Roger Federer, to get to the quarterfinals, but failed to match the intensity of Zverev.

‘Feli’ played a solid match making great use of his best weapon: his serve. The Spaniard had 19 aces and he needed each and all of them to counter the 21 of Berdych, who also has a very powerful serve.

Lopez, however was able to hold all his serves, something he used as a foundation to win the match.

The first set was a very even battle of power servers that needed to be settled with the use of a tiebreak, where the Czech won 7-4 to take the set 7-6.

The match did not change much in the second set, as it continued to be decided in great part by the powerful serves of both players, but Feliciano Lopez did not waste a new occasion to break Berdych’s serve in the sixth game and use it to win the second set and force the third and deciding one.

The player from Toledo,Spain, then used his skills and experience of playing on grass to turn around a rough start to the third set and then break another of Berdych’s serves to win the final set and punch his ticket to the semifinals of the German tournament.