Posted on July 1, 2019 by Bobby Goodspeed in Sports News 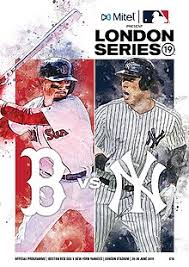 The long awaited premiere showing of MLB in Europe finally happened last weekend in the city of London during an unseasonal heat wave in England as temperatures soared into the 90’s at London Stadium in the Stratford district of downtown London.

London Stadium was built for the 2012 Olympics and features a circular roof which opens and closes according to the weather. The roof was open for the highly anticipated contest between the American League leading New York Yankees and the defending World Series champions, the Boston Red Sox.

Whether it was the open roof, the high temperatures or simply an excess of adrenalin, the baseball was flying high in London on Saturday as the score after the first inning was 6-6 and a sum total of 37 hits resulting in 30 runs being scored before it was all over.  The Over & Under had been set at 11.5!

The Yankees went on to score 2 more runs in the 3rd inning and put up another 6 in the 4th and 3 in the 5th but were shut out by the Red Sox bullpen for the remainder of the game.  Boston came back with a big six run inning in the 7th, but it was too little and too late.  The Yankees took the opener 17-13.

Baseball caps, jerseys and T-Shirts representing both clubs were flying off the shelves as well around the ball park.  A large percentage of the 60,000 some odd fans in attendance were decked out in MLB finery.  One gentleman even sported a two billed baseball cap with Yankees on one side and Red Sox on the other.

The crowd in general was most enthusiastic and really seemed to enjoy the event leading MLB Commissioner Rob Manfred to speculate that more games may be coming to more cities in Europe in the near future.  They even looked pretty convincing singing ‘Take Me Out To The Ball Game’ during the 7th inning stretch.

London Stadium was designed as a Soccer venue and is now the home of West Ham United of the Premier League. As such presented a few unusual quirks to the baseball players, like an outfield that covers over an acre of ground and greatly enhanced foul ball areas before running into the stands. Both first basemen were especially taxed by the extra space.

After the slug fest on Saturday, it seemed that Boston and New York were going to start it all over again when the Red Sox put up four runs in the first inning and the Yankees answered with 2 in the 2nd, but then the game settled down to some semblance of normalcy and no more scoring took place until the Yankees rallied with 9 runs in the 7 inning and took the Sunday contest by a final score of 12-8 to sweep the 2 game, first ever, London MLB Series.

It looks like we will be seeing more Major League Baseball games from Europe in the future.