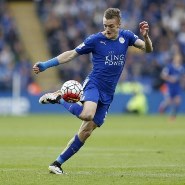 Leicester City won its sixth straight game since changing managers as they beat Sunderland 2-0 on Tuesday at King Power Stadium.

Sunderland, in last place, seems all but condemned to relegation as they allowed Islam Slimani and Jamie Vardy to score and propel Leicester City to victory in the second half.

The Premier League reigning champions climbed to the 10th place of the table with only eight games to play. On the other hand, after the defeat Sunderland is now eight points away from salvation and looks doomed, as they haven’t been able to score or win since February 4.

Craig Shakespeare, who replaced Claudio Rainieri on February 23 as manager of Leicester City, started the game with the same eleven men that defeated Stoke City last Saturday by identical result.

Yohan Benalouane started in the heart of the defense instead of the injured Wes Morgan and the speeding Demarai Gray in the left side instead of Marc Albrighton.

After a lackluster first half, in which the Foxes were far from their best, the match changed thanks to the modifications introduced by the Shakespeare.

Halfway through the second half, Slimani and Albrighton entered the game; and it was these two players who produced the first goal. In the 69th minute the English winger sent a cross into the penalty area seven minutes after he stepped on the pitch and Slimani managed to head it to the back of the net for the opening goal.

Albrighton himself engineered the 2-0 nine minutes later, when he sent a center to Vardy and the prolific English striker did not fail against goalkeeper Jordan Pickford.

From David Moyes’ Sunderland there was no response until just before Vardy’s goal, when a shot from Victor Anichebe bounced off the post, before Jermain Defoe failed to score off the rebound.

Leicester City, who had a disappointing start to the season under Ranieri, is looking more and more like the vibrant and sharp team that shocked the world last season when they took the Premier league by storm and won the title.

After defeating Liverpool, Hull City, West Ham Stoke and now Sunderland in the Premier League; and Sevilla in the Champions League, Shakespeare and his men must now prepare for a busy schedule.

On April 9 they visit Everton, and then they must focus on their quarterfinals Champions League matches against Atletico Madrid (April 12 and 18) without forgetting the visit to Crystal Palace on April 15.