Kevin Durant Makes The Warriors A Lock To Win The Title 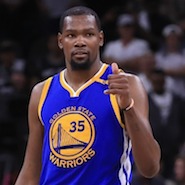 The Golden State Warriors crushed the Minnesota Timberwolves 125-101 without Kevin Durant to improve to 9-3.

The Golden State Warriors are so good right now that it’s not unthinkable to say that they don’t need Durant to win the NBA title this season.

The Warriors already won an NBA Championship without Durant in the 2014-2015 season. Then, in the 2015-2016 season they won 73 regular season games and made it all the way to the NBA Finals without him before losing in game 7 after holding a 3-1 lead.

Having said that, it’s undeniable that Durant makes them better and increases the odds of them winning it all this season once again.

When Durant sat late last season before the playoffs the Warriors were still winning. He is however very valuable because he puts them over the top. If Durant is healthy it’s very unlikely that any other team can take them down in a seven game series to win a championship.

But in the worst-case scenario that Durant gets to miss the playoffs or the NBA Finals the warriors have a team that is good enough to win another NBA title this year.

Steph Curry, Draymond Green, Klay Thompson and the Warriors supporting cast, coached by Steve Kerr can still contend and probably win another title without him as they have already proven this before.

This season, however, it’s a good thing they have him because the Warriors are better with him and he increases the odds of them defeating reenergized teams like the San Antonio Spurs, the Houston Rockets and the Los Angeles Clippers; and even the struggling Oklahoma City Thunder, whom will probably have figured out how to win consistently by the time the playoffs arrive.

If they win the Western Conference, even without Durant the Warriors will probably be favored to beat anyone coming out of the East and most likely find a way to do it; but with Durant they will be undoubtedly be the favorites and repeat as NBA champions this season.