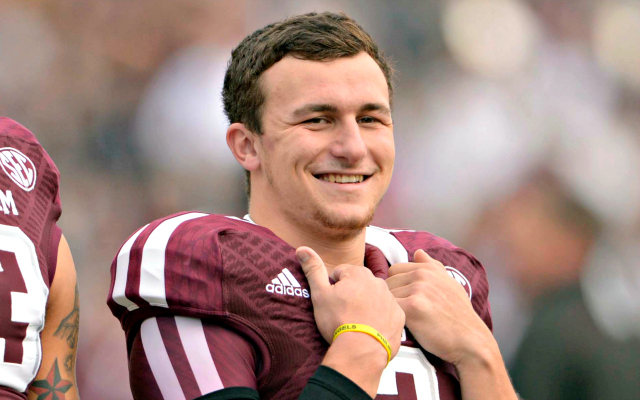 Johnny Manziel has been rubbing those fingers together for a couple of years now.  Pissing off some folks and inspiring others. Like him or not, Manziel is one of the most dynamic figures to appear on the American sporting scene in many a year.

Everyone following Manziel’s career has known for some time that the talented young quarterback would be cashing in on a big payday at some point. That day finally came for Johnny Football when he signed a nice four year contract with the Cleveland Browns worth $8,247,000!

Manziel was also blessed with a fat signing bonus of $4,320,000, right off the bat!  He hasn’t even taken a snap from center yet. The Browns also hold the option on a 5th year in the Manziel contract. Yet another overnight millionaire.

The Cleveland Browns drafted Manziel in the first round at #22 but after QB Blake Bortles had already gone to Jacksonville. Those who had wagered that he would be the first quarterback taken, lost their bets.  But, Bortles remains unsigned at this point and Johnny Football just took home over four million bucks.

The Browns needed a good quarterback, badly and they knew it. They traded up to number 22 in the first round of the 2014 NFL Draft in order to grab Johnny Manziel. That now appears to have been the plan all along. Manziel had already met with the Browns coaching and staff members, so they knew they weren’t getting a pig-in-a-poke.

After the tension and the waiting were finally over and Johnny Manziel was actually going to the NFL, he did a little celebrating, wouldn’t you? He went to Las Vegas, naturally and got his picture taken with celebs and lots of pretty girls.

Actually, the whole weekend was documented like something off the BBC. The kid couldn’t go to the bathroom without some jerk sticking a microphone in his face.  Then there was the report of Johnny Football riding atop an inflatable swan in a parade in Austin with a bottle of champagne in his hand. So what?  How would you like people following your every move with cameras and mikes?

So the Browns look to have acquired their much needed franchise saving quarterback. He’s young, dynamic and the media (most of them) seem to love him. This could well work out to be a win-win situation for both sides.

Now all Manziel has to do is to beat out Brian Hoyer for the starting quarterback job and begin his journey into the record books of the NFL.