How The Packers Can Beat The Patriots On Sunday Night

Posted on November 2, 2018 by admin in Sports News 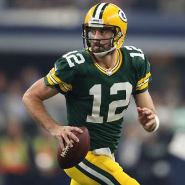 If quarterback Aaron Rodgers and the Green Bay Packers (3-3-1) want to upset the New England Patriots (6-2) on Sunday night at Gillette Stadium, they need to accomplish several key things. Here’s a quick look at them:

1.- The Packers will need to start fast and score often in the first half to try to go up by two scores and try to make New England one-dimensional. The Packers should try to exploit the fact that New England lacks a powerful pass-rush to put pass pressure on Aaron Rodgers and when that happens, he often eats opposing defenses alive.

Typically, when teams beat Brady, they manage to rough him up early, even if they fail to sack him. The Packers need to knock Brady down, push him around, disrupt his plays and even batt down his passes from the moment he steps on the field because if he manages to get comfortable in the pocket, he will make the Packers pay.

3.- Rodgers needs to take advantage of scoring opportunities inside the red zone to help the Packers build up the score. He needs to get off to a hot start to put pressure on Brady and the Patriots as they are almost unbeatable at Foxboro.

4.- Packers running game has to get going to help Aaron Rodgers engineers a win on the road, something the Packers haven’t achieved this season. Packers’ head coach Mike McCarthy needs to use his running game with more authority and consistency for the Packers to avoid becoming one-dimensional against the Patriots.