Home » Sports News » How The Eagles Can Upset The Patriots

How The Eagles Can Upset The Patriots

Posted on February 2, 2018 by admin in Sports News 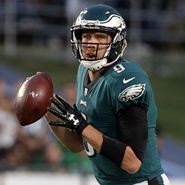 If the Philadelphia Eagles are going to upset the Patriots, Nick Foles will have to at least come close to repeating his NFC Championship passing performance where he torched the Minnesota Vikings for three touchdowns and 352 yards.

Foles had a perfect passer rating in that game when targeting wide receiver Alshon Jefferey, and although it will be tough for him to replicate that kind of performance against the New England Patriots and defensive coordinator Matt Patricia, the Eagles passing attack usually responds when the game is on the line because it’s both diverse and has proved to be efficient on third down.

The third-down attack has been especially effective during the playoffs. Against the Vikings, the Eagles converted on 10 of 14 third downs thanks to their run-pass option plays. The Eagles RPOs keep baffling opposing defenses as their solid group of pass-catching running backs finds ways to convert on third-down plays.

The Patriots typically deploy two corners to shutout pass catchers, which means they will have to decide who to take away and who not to. The Patriots have allowed five receivers to earn 100 or more yards this season but have not allowed a single tight end to earn more than 75 yards.

This is important because, against the Vikings, Philadelphia leaned heavily on Zach Ertz to get first down conversions on third down. Although he didn’t score, Ertz caught eight passes (five for first downs) as he finished with 93 yards.

Patricia will order his defense to rely on man-to-man coverage to try to effectively minimize the ability of the Eagles pass-catching weapons and then try to use an extra defender to try to limit the Eagles dangerous run game.

So, if the Eagles want to defeat Tom Brady and lay hands on their first Lombardy Trophy they’d better establish the run on first down. After all, in the Patriots three losses this season they allowed over 120 rushing yards and overall, they were fifth worst at stopping the run 0n first down.