How Porzingis Will Transform the Dallas Mavericks Next Season 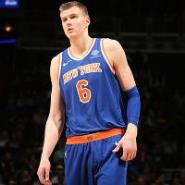 Although Porzingis is out for the season, once he recovers from his torn ACL injury the Mavericks could have one of the most formidable duos in the NBA as he would pair along small forward Luka Doncic.

Both players could become the foundation the Mavs needed to build around and transform them next season into one of the best teams in the Western Conference.

Porzingis has proved to be a very solid and versatile player when he’s healthy so he could easily fit as the Mavs’ new starting power forward or center. As their new star frontcourt player Porzingis should provide the same spacing and shooting that Dirk Nowitzki once provided.

If the Mavericks decide to re-sign power forward Maxi Kleber they could have a frontcourt that would give them excellent rim protection and solid long-range shooting as they’re both above average from beyond the arc.

Porzingis should be one of the top scoring options for Dallas next season playing along Doncic as they both score from almost anywhere on the floor, which should make the Mavericks very hard to defend. Porzingis versatility allows him to score off isolations, pick and pops, pick and rolls, among other types of plays.

The attention that Doncic and Porzingis should garner could translate into plenty of open shots for other players such as Harrison Barnes, Courtney Lee, and Hardaway Jr.

The duo could also lead to potential free agents wanting to sign with Dallas in the offseason as they are on the verge of becoming a contending team that will provide them with plenty of scoring opportunities.

As long as Porzingis manages to stay healthy and is able to return to his pre-injury level the Mavs are well on their way to become a top contender next season and beyond.