Get Ready For The NASCAR Chase To Begin In Chicago 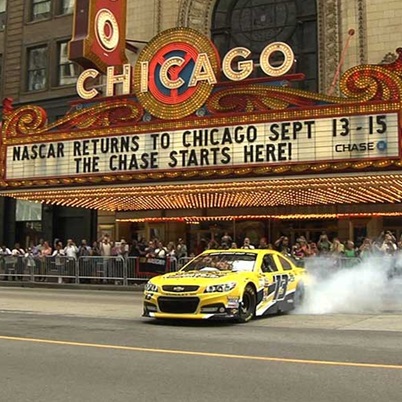 When veteran NASCAR driver Tony Stewart managed to break his leg while participating in a dirt track race last week, he opened up a space in the annual NASCAR ‘Chase’ which has become so popular with race car fans.

On September 15th, the 12 drivers who made this year’s chase will be racing in Chicagoland for the first time without the rest of the field.

Stewart’s injury, combined with the results of the last race at Watkins Glen, have jumbled up the picture and suddenly the ‘Race for the Chase’ becomes a little more muddled.

Tony Stewart is out and Chase contenders Dale Earnhardt Jr., Jeff Gordon and Kasey Kahne all found themselves caught up in accidents at the Watkins Glen road course race and lost some points in the process.

That leaves us with seven NASCAR drivers looking like shoe-ins to make the cut in September.  They include Jimmie Johnson (of course), Clint Bowyer, Carl Edwards, Kevin Harvick and Kyle Busch who are all far enough ahead so that it is most unlikely that they will lose their spots in the Chase.

The top 10 drivers will all make the chase plus an additional two drivers ranked from 11th -20th finishers who have the most victories in 2013.  These will be the two
‘Wild-Card’ entries and the battle for those spots is far from over.

Ryan Newman, Dale Earnhardt Jr., Jamie McMurry and Joey Logano are all knocking on the door and just itching to get into the Chase action. After all, that is where the big bucks are won in NASCAR racing.

Let’s take a look at the ‘Power Rankings’ with about 4 weeks remaining until the cutoff.

Jimmie Johnson is number one and once again the odds on favorite to win the 2013 NASCAR Championship title as he has done so often in the past. Kyle Busch is currently ranked second and looking like a real contender to win it all.

Although Clint Bowyer is ranked 8th overall, he rates third place in the power rankings and Kasey Kahne, who is actually ranked 3rd, takes 4th place.

The ever popular Dale Earnhardt Jr. gets the nod for 5th place while Matt Kenseth is close on his heels in 6th place. Kevin Harvick, Carl Edwards, Kurt Busch and Brad Keselowski round out the top ten power rankings going into the final weeks of the current NASCAR regular racing season.