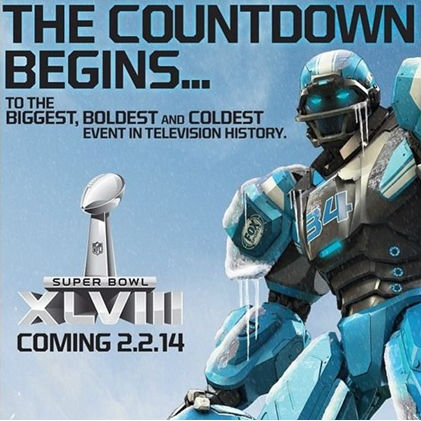 Although the proverbial dust is still settling after the Ravens 2013 Super Bowl victory over the San Francisco 49ers down in New Orleans, some of the more adventurous odds makers out there are already starting to speculate on the 2014 event which will be Super Bowl XLVIII.  The big show will take place outdoors….up in New Jersey at the Meadowlands…..and quite possibly in the snow and sleet.

It may seem a little early, but for the truly dedicated NFL bettor, it is never too early to get a jump start on next years’ annual gridiron spectacular.

Sports Books who are putting up the numbers are already taking some futures action on next year’s Super Bowl and a few surprises have come to light so far.

The early on money is going to the Seattle Seahawks, listed at +1200 and the New Orleans Saints at +1500.  Futures shoppers are also putting down good money on the Washington Redskins, currently at +2,800, but the continuing uncertainty concerning Robert Griffin III keeps that wager in the category of high risk gambling.

The Seahawks have been the most popular bet so far both online and in Las Vegas.

The Mirage opened them at +1200 and moved quickly to +800 with bettors banking on Russell Wilson to take Seattle to the big one next year……and that was before the Seahawks landed Percy Harvin.

The other early bird special is the Saints in New Orleans who really feel that they have something to prove after an absolutely terrible year in 2012.  The Saints, in the words of Drew Brees, are “chomping at the bit” to get going on next year.  The return of Head Coach Sean Payton should get them back into the mix in the NFC South, which is pro football’s toughest division.

Believe it or not, considerable amounts of money are being wagered on the Cleveland Browns to win Super Bowl XLVIII.  Maybe somebody knows something that we don’t know……do you think?  The Browns are standing at +8000 as of now.

From another, perhaps more realistic, viewpoint, other sources are listing the New England Patriots at 6/1, the San Francisco 49ers at 7/1, the Denver Broncos at 8/1 along with the Seattle Seahawks.

The Green Bay Packers at 10/1, the Houston Texans at 15/1, the Atlanta Falcons at 17/1 and the Pittsburg Steelers and the New York Giants at 18/1 round out the favorites at this, still very early date.