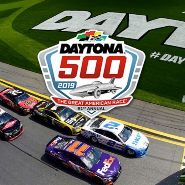 The 2019 NASCAR season kicks off as the season’s premier event, the 61st annual running of the Daytona 500, takes place on Sunday at the Daytona International Speedway.

The Great American Race is the most important NASCAR event of the year, a race that many drivers see it almost as a separate racing season due to the fact that winning it is one of the greatest driving achievements.

Being called champion of the Daytona 500 is a title that any driver wants to add to his resume, a career-defining moment that will always be referenced as the greatest achievement in their professional career, thus many drivers focus on winning it rather than think about how many points they can get out of it.

For this race, Las Vegas has Brad Keselowski and Joey Logano at +600, followed by Kevin Harvick at +700, and Denny Hamlin at +850.

William Byron (+3300), the 21-year-old-driver for Hendrick Motorsports earned the pole position, and his 25-year-old teammate Alex Bowman (+2900) took secured the front row to comprise the youngest front row in the history of the iconic race.

Hamlin, who had a disappointing 2018, is under a ton of pressure to win the race as Joe Gibbs Racing is a team that is always expected to win. He’s expected to deliver multiple wins throughout the course of the season. Winning the most important race of the year would be a superb way to start the season and take a huge amount of weight off his shoulders.

Jimmie Johnson (+1400), NASCAR’s seven-time champion, last year failed to win a race for the first time since his rookie season. He will try to put an end to his victory drought with a win at Daytona. Although he may have a hard time taking the checkered flag, a top five result is not out of the question as he looks to become competitive once again.