D-backs Use A Three-Run Eighth To Beat Persistent Rockies 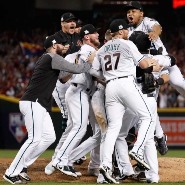 With three runs in the bottom of the eighth inning, the Arizona Diamondbacks shook off the pesky Colorado Rockies to earn a very tough 11-8 win that allows them to advance to the National League Division Series.

Arizona will face the Los Angeles Dodgers starting Friday in one of the divisional series. The other N.L.D.S matchup, which also starts on Friday, features the Chicago Cubs and the Washington Nationals.

The N.L Wild Card Game had plenty of offense as both teams combined for 19 runs and 30 hits.

Left fielder David Peralta opened the game with a single, followed by another hit from shortstop Ketel Marte before first baseman Paul Goldschmidt homered off starter Jon Gray for a 3-0 lead.

Peralta and Marte combined again in the second inning to rattle Gray once more. Peralta hit single and Marte a triple to give Arizona a 4-0 lead.

Gray left the game after pitching just 1.3 innings, in which he allowed four runs and seven hits to earn the loss.

Second baseman Daniel Descalso kept the Diamondbacks rolling in the third inning. After a single by third baseman Jake Lamb, the left-hander homered off reliever Tyler Anderson to give Arizona a 6-0 lead.

Arizona’s starter Zack Greinke left the game after 3.2 innings of work in which he earned four runs. Colorado managed to shake Greinke in the fourth inning with four runs and five hits, including RBI singles by left fielder Gerardo Parra and pinch-hitter Alexi Amarista and a one-run double by catcher Jonathan Lucroy, to make it 6-4.

In the seventh inning, with one out on the board, Lucroy doubled again and proceeded to reach third base after a wild pitch by reliever Robbie Ray. Center fielder Charlie Blackmon brought Lucroy home with a sacrifice bunt to make it 6-5.

Arizona increased the lead in the bottom of the seventh inning with a two-run triple by reliever Archie Bradley off reliever Pat Neshek. Lamb and Descalso scored on the play after they reached base with a single and a walk respectively.

But on the top of the eighth Bradley allowed solo home runs to third baseman Nolan Arenado and shortstop Trevor Story to keep the Rockies in the thick of it as they made it 8-7.

Arizona finally shook off the Rockies in the bottom of the eighth inning after they scored three runs against reliever Greg Holland. Center fielder A.J. Pollock hit a two-run triple that gave the Diamondbacks a 10-7 lead. Catcher Jeff Mathis followed with a single on a bunt ground ball to bring Pollock home and make it 11-7.

Carlos Gonzales hit a two-out RBI single in the ninth inning to make it 11-8 before closer Fernando Rodney forced Arenado to ground out to second.

Andrew Chafin, who pitched just one-third of an inning in the fourth after relieving Greinke, earned the win.