Posted on November 9, 2018 by admin in Sports News 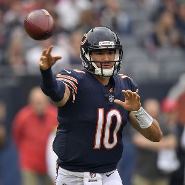 The Detroit Lions (3-5) and the Chicago Bears (5-3) clash at Soldier Field on Sunday in an NFC North matchup that features an interesting battle between running back Kerryon Johnson and Roquan Smith.

Kerryon Johnson, who ranks fourth in the NFL with an average 5.7 rushing yards per attempt, is vital to the Lions attack because they need to be able to run the ball in this matchup against arguably the best defense in all of football.

Roquan Smith and the rest of the Bears’ physical run defense, on the other hand, will try to keep Johnson in check by limiting the spaces between the tackles and getting backfield penetration.

Smith was a proven talent coming out of college and he clearly didn’t disappoint as this season he’s already showcased a combination of instincts, range, and physicality for a Bears rushing defense that ranks third in the league as it allows 84.88 yards per game.

Just last week against the Buffalo Bills, Smith finished the game with 13 tackles and a forced fumble proving that he has a knack for staying close to the ball that becomes a lethal tackler when he arrives at the ball carrier.

Johnson and Smith will get a chance to get reacquainted and renew their college rivalry from their SEC days last year when they squared off twice as players of Auburn and Georgia respectively.

The Bears will try to take advantage of a Lions team that had problems pass protecting Matt Stafford last week against a Minnesota Vikings that is not nearly as talented as Chicago’s, which also features Khalil Mack, Danny Trevathan, and Kyle Fuller.

When they have the ball, the Bears will try to exploit the Lions defense with their multiple-level offense, which is averaging 24.9 points per game and ranks fifth in the league.

Look for the Bears to pound the rock early with running backs Jordan Howard and Tarik Cohen and then, once they open up the passing game, let quarterback Mitch Trubisky take to the air to connect with wide receivers Taylor Gabriel, Allen Robinson and even Cohen himself, who leads the team in receptions and receiving yards.