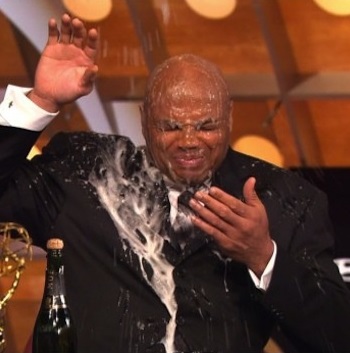 NBA Hall of Famer Charles Barkley has made the successful transition from the basketball court to the broadcast booth and he’s done it with style and grace.

Barkley’s candid commentary has been both entertaining and enlightening over the past 13 seasons on TNT.

A few days ago Barkley received, for the second year in a row, an Emmy for “Outstanding Sports Personality” in the Studio Analysts category.  Quite an accomplishment for a basketball player coming out of Leeds, Alabama.

Barkley is a member of the TNT halftime and postgame show called “Inside the NBA” which airs during every TNT game broadcast.  He has a brash, strait forward style that is often loud, often humorous and almost always speaks right to the point without pulling punches. If a player is not playing up to Barkley’s expectations, Charles will not hesitate to call him out on national TV.  Still, overall, Charles Barkley comes off as likeable and knowledgeable on the show.

And Barkley does not always stick to the easy and amusing subjects. As light as the atmosphere is on the show, these guys do not avoid the heavier subjects of concussions and homosexuality in the NFL today. In his past 13 years with the show, Barkley has become one of the most beloved figures in sports broadcasting today.

So beloved is he that his partner on the show, Kenny Smith, anointed Barkley with a large bottle of champagne while the show was on the air to celebrate the Emmy award much to the delight of host Ernie Johnson and, of course, Shaq.

The recent addition of Shaquille O’Neal to the show has given Barkley yet another partner to trade jabs with and “Sir Charles” has been instrumental in making Shaq a success on Inside the NBA.  This probably won’t be the last Emmy for Barkley and, who knows, maybe there will be one for Shaq in the near future.

The “best analyst award” went to Chris Collinsworth for the fifth year in a row.  Pierre McGuire, of NBC’s “Inside the Glass,” also won an Emmy for broadcasting about Ice Hockey games and Tom Verducci took one home for his Baseball coverage.

Congratulations go out to all of these guys. Keep up the good work.