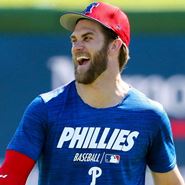 Bryce Harper has signed a 13-year $330 million contract with the Philadelphia Phillies making it the largest guaranteed deal in American sports history.

The deal, which Harper hopes will be the last of his playing career, has an average annual value of $25.4 million per season, which ranks 14th in league history.

In addition, the contract contains no opt-outs, no deferred money, and a full no-trade clause. The impact of the signing was felt almost immediately as the Phillies announced that from the moment the deal was first reported yesterday to this morning, they have already sold over 100,000 single-game tickets.

The Phillies had already had a very good offseason and were ready to fight for a division title, but this deal makes them arguably one of the top contenders in the National League.

The additions of Andrew McCutchen, Jean Segura, J.T Realmuto, and now Harper will make this lineup one of the toughest to deal with regardless of who opposing teams have in their starting rotation.

The race for the N.L East crown now looks to be one of the toughest in baseball, not only due to the Phillies marked improvements, but because the Braves, who are fresh off their 2018 division title, return almost intact; the Washington Nationals, who signed Patrick Corbin, look like a very strong team despite the loss of Harper; and the New York Mets have also improved considerably since the end of last season.

Despite all of that, thanks to Harper’s addition the expectations in Philadelphia went from contending to win the division and make the postseason, to winning the National League Pennant and the World Series.