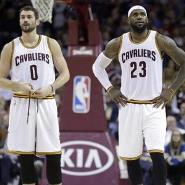 The Cleveland Cavaliers looked simply overwhelmed during the first two games of their Eastern Conference Finals series against the Boston Celtics. Now LeBron James and company return to Cleveland hoping that playing in front of their home fans will ignite the team.

The Cleveland Cavaliers season, and perhaps the second LeBron James era in Cleveland are at a crossroads as the team heads into Game 3 against the Boston Celtics in the conference finals trailing 0-2.

A loss Saturday at Quicken Loans Arena would all but confirm the demise of the Cavaliers. Losing to a healthy Celtics team would be one thing but losing to a Celtics team without their two best players would be inexcusable. Cleveland needs to protect its turf to get back in this series.

The Cavaliers are 13-2 in their last 15 games at Quicken Loans Arena, including 5-1 during this postseason.

The big question is who will help LeBron and Kevin Love? James and Love have combined to account for 54% of the points, 52% of the rebounds and 46% of the Cavaliers shots during this series.

Odds of the Game: