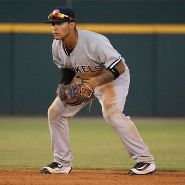 After the arrival of shortstops such as Corey Seager, Orlando Arcia, Trea Turner and Alex Bregman to the big leagues in 2016, there’s a lot of expectations surrounding the potential new prospects that could shine in 2017. With that in mind here’s the list of this season’s top prospects:

He arrived to the Yankees organization from the Chicago Cubs as part of the trade that sent Aroldis Chapman to the Cubs. Shortly after the trade the young Venezuelan  consolidated as the best shortstop prospect for 2017.

The player appeared in the Arizona League where he showed great talent batting .403 and taking the batting title. The 19-year-old Torres won the league’s Most Valuable Player award, becoming the youngest player to ever win it.

Last season the prospect of the Atlanta Braves played in 38 games where he mostly appeared as shortstop, where he proved that his defense is one of his best skills.

The 22-year-old prospect also showed His batting skills, finishing with a.302 average with three homers, 17 RBIs in 129 at-bats.

The New York Mets shortstop prospect has not had a chance to make a major league debut, but it looks as if his first call up to the big leagues with the Queens-based team should be a matter of time.

His professional debut was in 2013 and since then he has gone through all the stages in the minors. He has a .280 batting average with 10 homers, 147 RBIs in 358 regular season games.

The Philadelphia Phillies shortstop was drafted with 16th ovberall pick in the 2013 draft. Crawford is considered one of the best defenders among shortstop prospects.

His call to the Phillies’ seems imminent, as he’s considered one of the best prospects in the Phillies farm system. He could join them as part of the team rebuilding efforts taking place in 2017.

The player has proved to be a great hitter and aims to become an above-average power hitter as he seems to be reaching his full potential in the minors. He’s a player of many skills, versatile enough to play in several positions and because of that could move to second or third base in order to reach the big leagues.